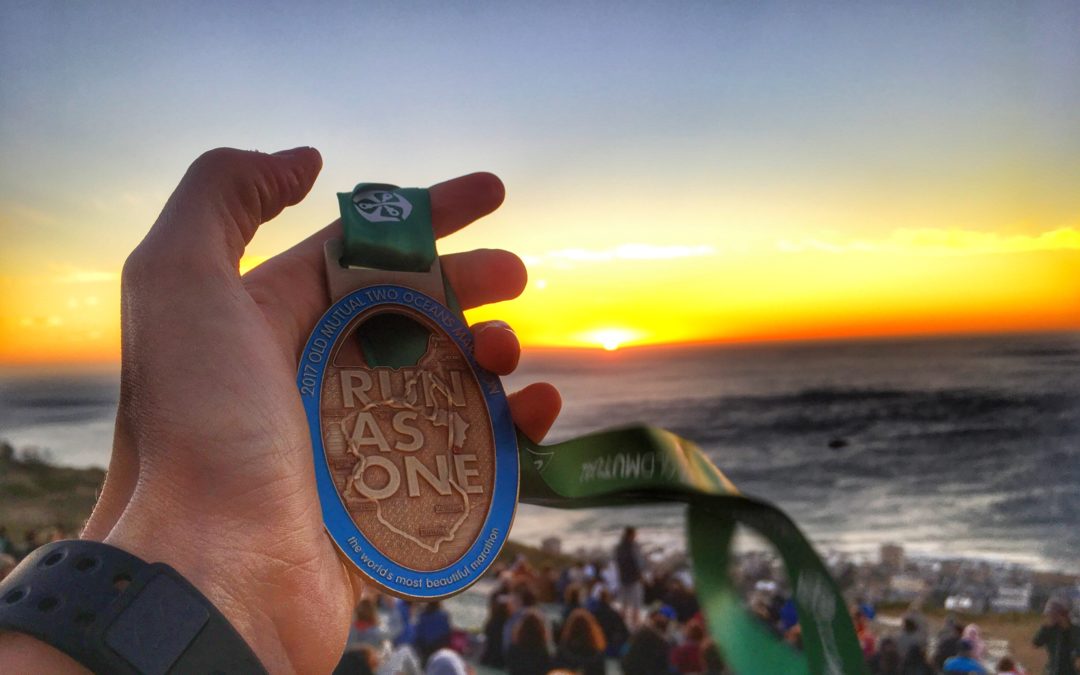 I have had the famous Two Oceans Marathon on my bucket list for a while. To be exact, I had it on the “when I am fast enough to run an Ultra Marathon” bucket list. Because it is one of two famous South African Ultra Marathons, and the classic distance is 56km. I had thought of doing it in 2018, when my Dad was probably also fit and fast enough to run it.
So when I suddenly got the opportunity to run the Two Oceans Marathon via a “first come first served” give away on adidas runners Germany I immediately said yes. I did not really believe I would get the spot because I thought a lot of other people would also apply.

But I did and I was really surprised. And scared, because the race was just a week before London Marathon and I had barely started training back then. I did not know anyone else who was going, but I quickly connected with other adidas runners from Germany, Austria and Switzerland. As the weeks passed I was confident that I could finish the 56km. I continued doing my normal Marathon training, with two Half Marathon races in between. (Malta and NYC Half). My longest training run was 37km which I did at a super slow speed of 9km/h. A week before the race I sprained my ankle doing a Spartan Race. I went out for a training run the next day and had to stop after 1 km because it was too painful. Suddenly, I was panicking. What if I could not race? All that money and time spent for nothing? Before I flew out to Cape Town I applied a proven emergency recovery strategy: rest, ice, ibuprofen and my favorite Wobenzym anti-inflammatory enzymes. Two days before the the Two Oceans Marathon I went for a 5km training run with adidas runners Cape Town, (where we also met 2015 and 2016 winner Caroline Wöstmann) and the pain was nearly gone. 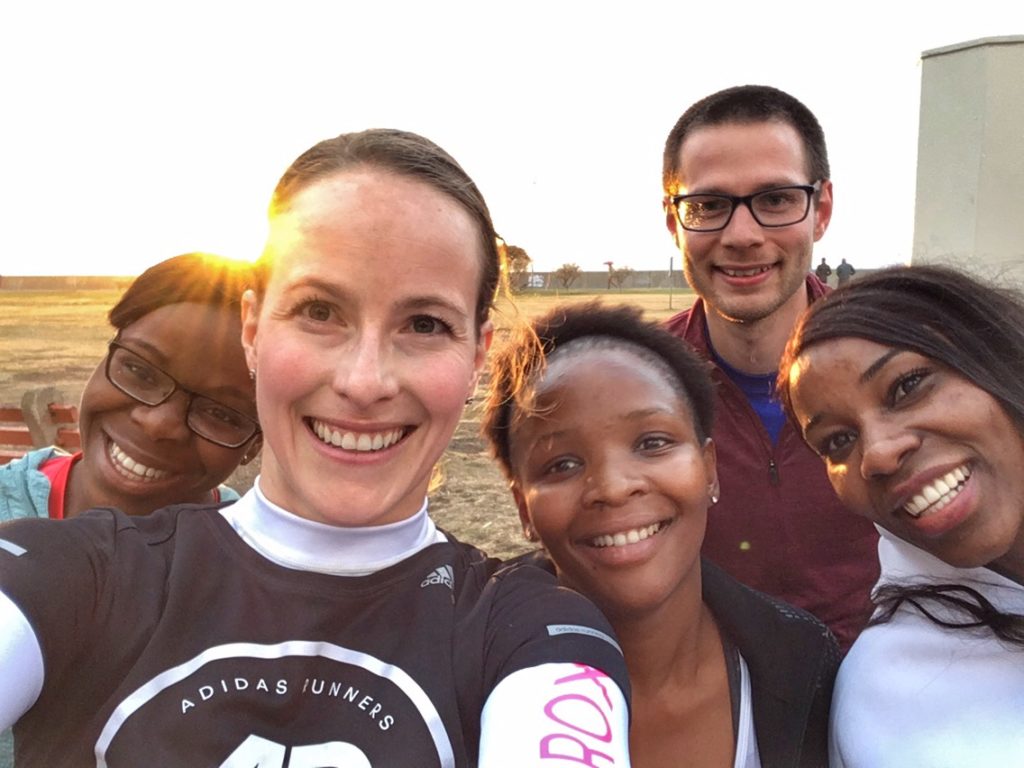 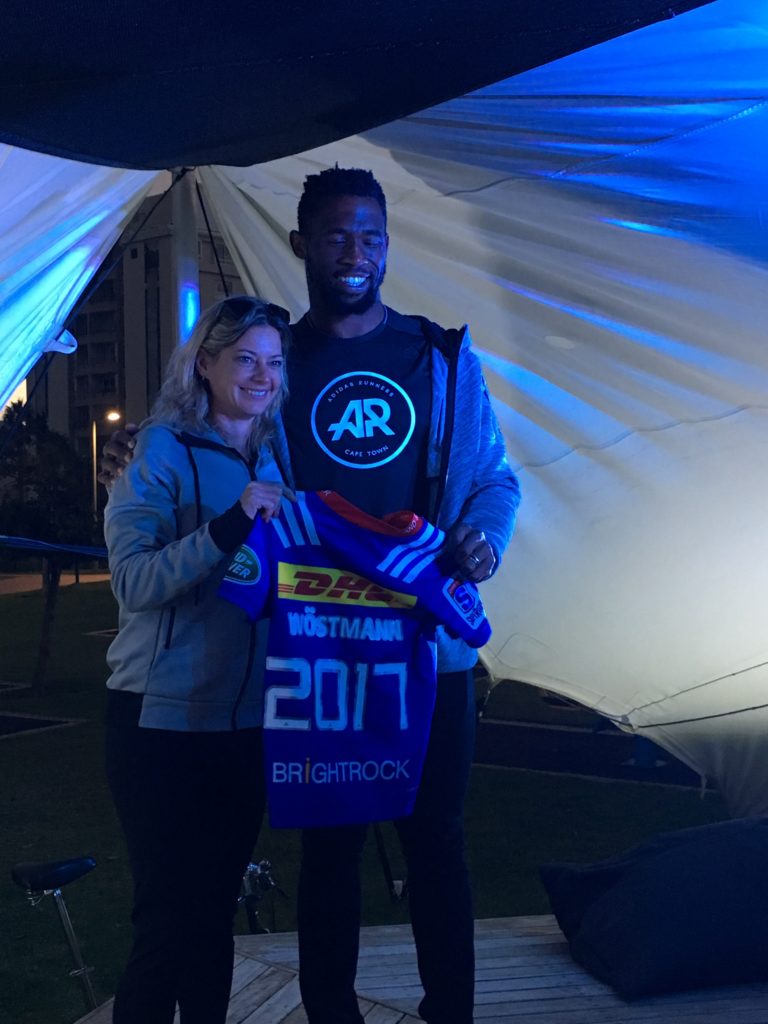 But the night before the race was absolutely awful. I suffered from nervous tummy issues, and could not fall asleep. In addition I then woke up in the middle of the night because someone was robbed just outside my window. (I swear that happened). After just 4 hours of sleep I had to get up again. Still half asleep we got into the taxi at 4am. The other runners had warned us that the traffic jam would be really big, so we headed out early. It turned out a bit too early. There was already a small traffic jam at the motorway, but our driver took a detour and dropped us off right at the other side of the start line. We arrived at a completely empty start line with nearly two hours to spare. 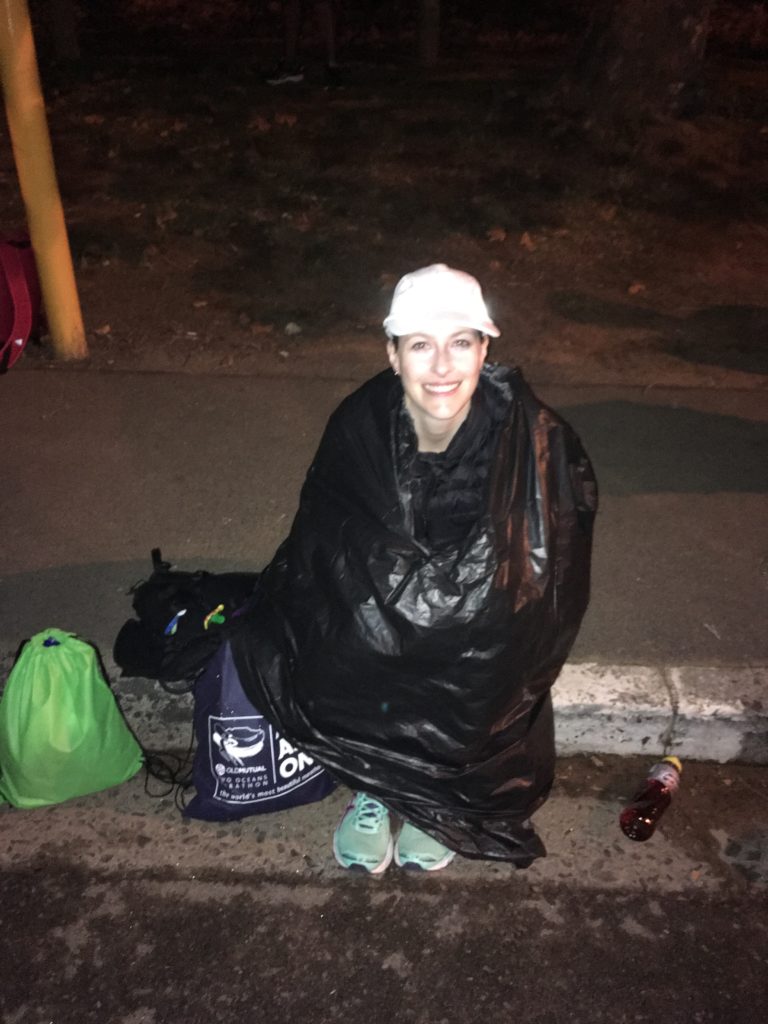 But it got busy very quickly. I queued for the loos a first time and waited only 10 minutes. When I queued for the second time it was 45 minutes. The lack of porta-potties was so bad that several other runners missed their start for the Half Marathon. I then had to queue again to drop my bag. All this standing and waiting was definitely not the best for my mood. When I finally arrived at the starting line of the Two Oceans Marathon I was tired, hungry, and had to go to loo again. But everything changed once they set off to sing the South African anthem. Everyone was singing along. It was such a beautiful moment and it absolutely lifted my spirits. 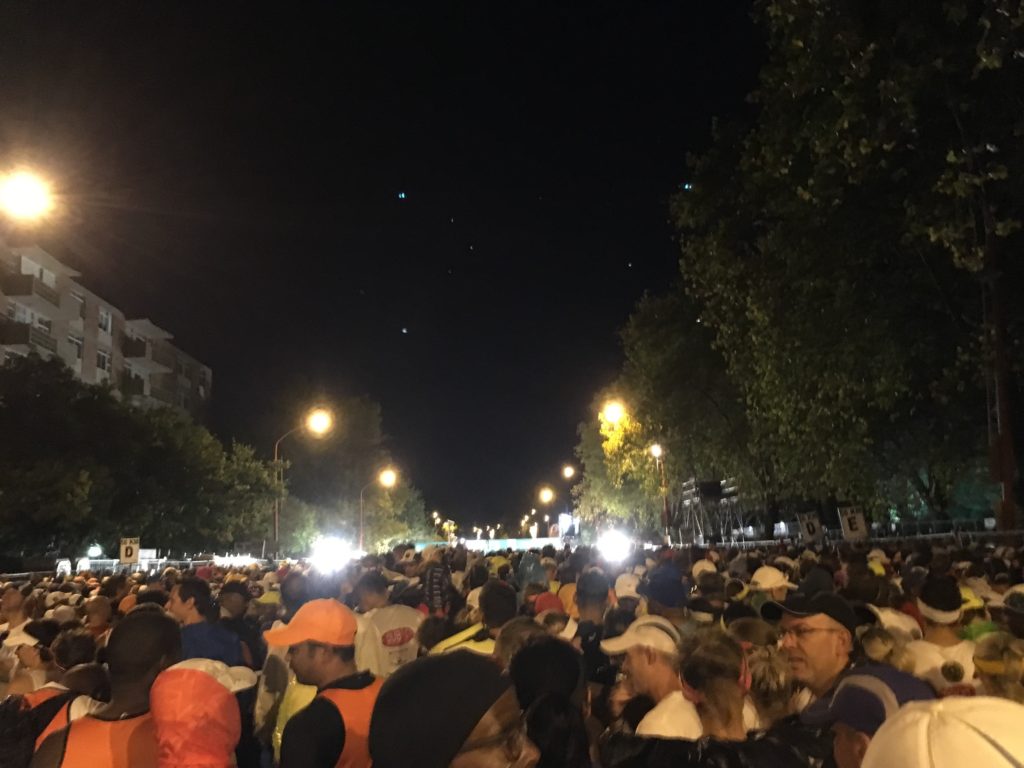 And off we went at 6:40 into the sunrise. The first 15 km were absolutely straight and monotonous, even boring sometimes. But it was a relief as well. We had time to get into our rhythm, chat with other runners and adjust our pace. 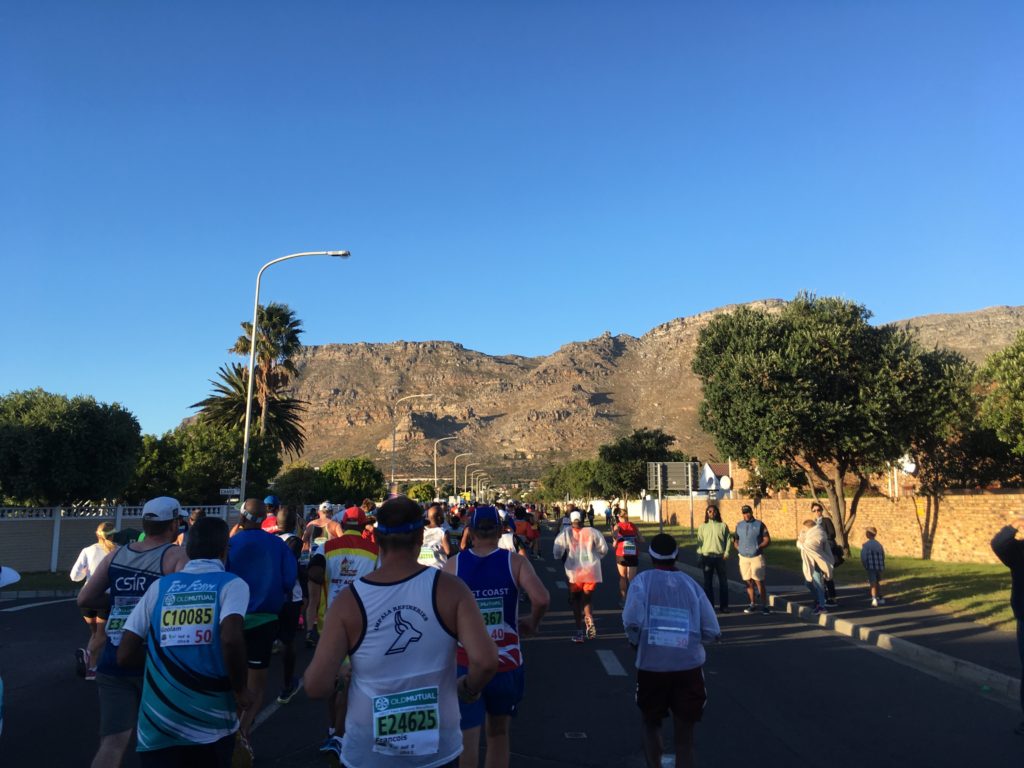 When we arrived in Muizenberg we saw the Indian Ocean for the first time. (Technically it is still the Atlantic, but let’s ignore that.) 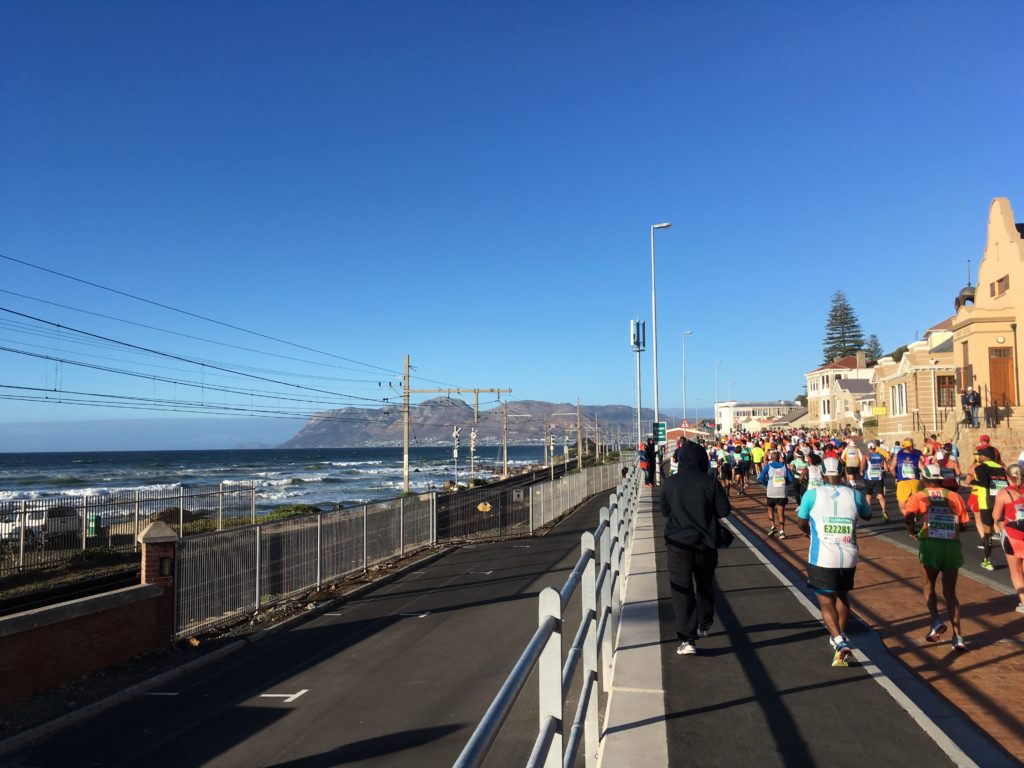 We continued for a while along the rail tracks before we had to head west towards Fish Hoek and Nordhoek, where we saw the Half Way Mark. 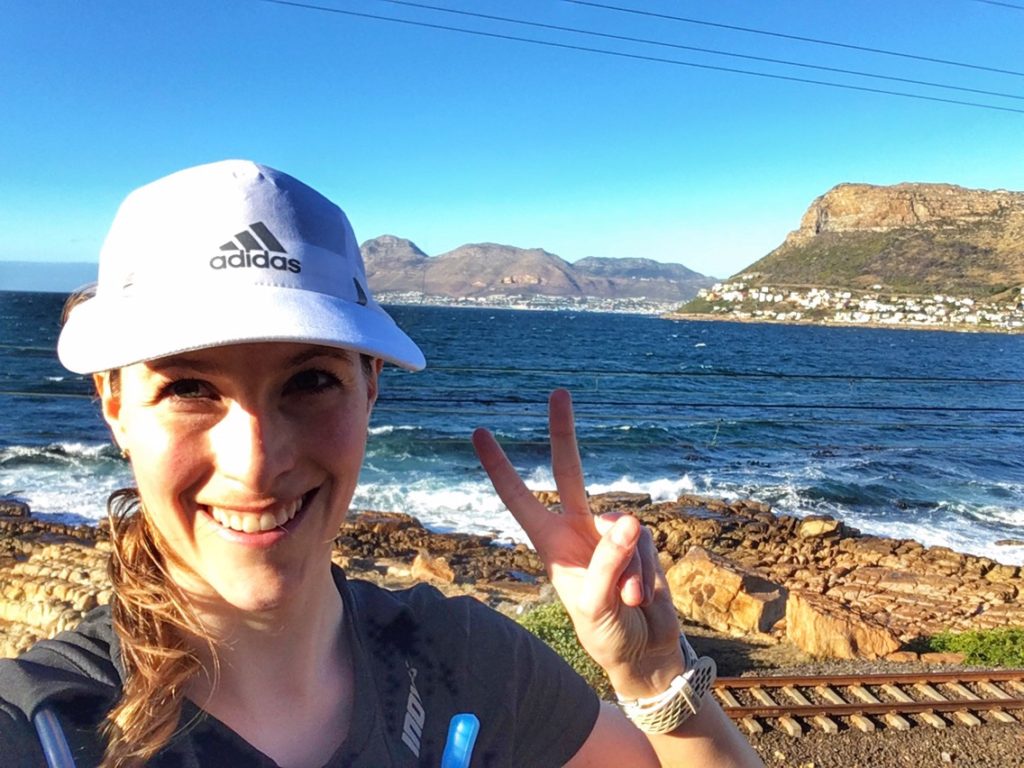 I realized that this also meant, that the easy flat part was over and the grueling second half of the race was about to come. Before we reached the bottom of Chapman’s Peak and started the second half of the race we passed the first food station where they handed us potatoes. I had never tried salted potatoes at a race before, so I skipped them. Which I really regret because my friends told me they were delicious. I had my favorite clif bloks instead to prepare myself for the first of two climbs. And then I came round the corner and saw the ocean. 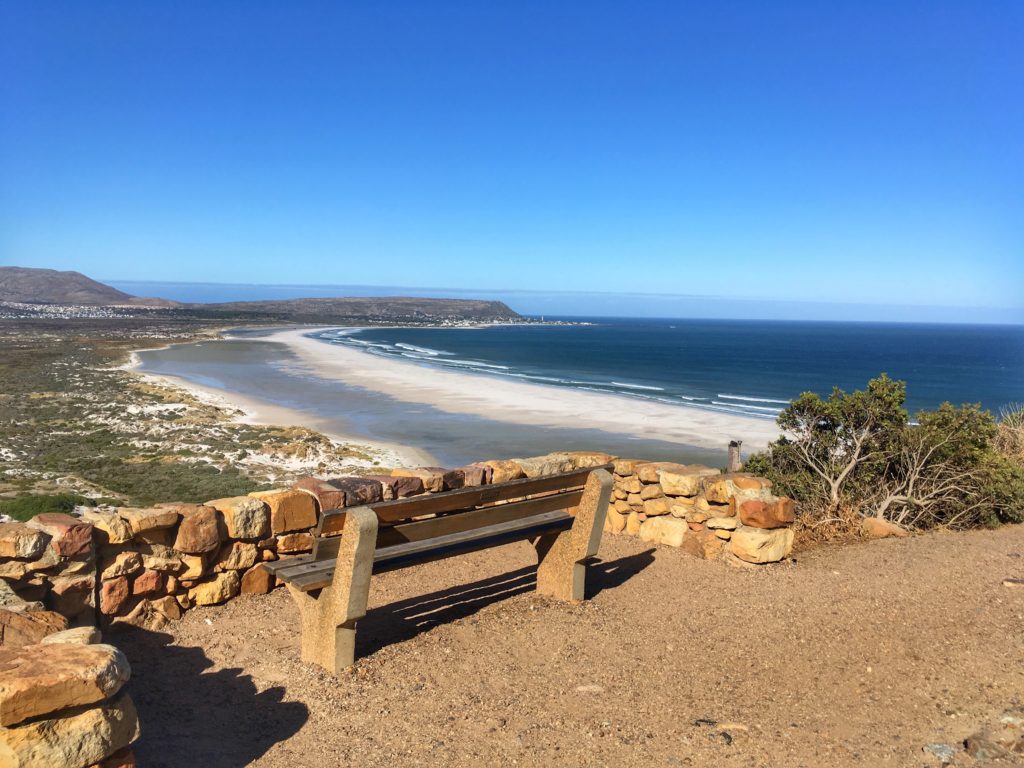 The view was so incredibly spectacular that I had to stop and take a selfie. And then another one. And another one. 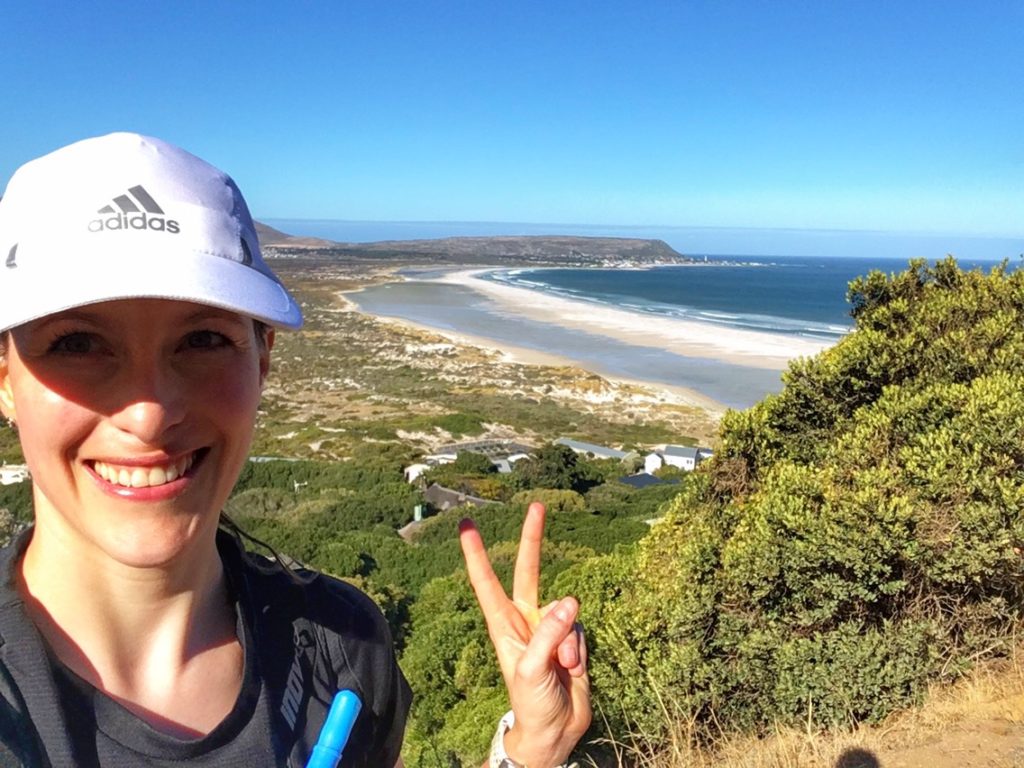 I was constantly overexcited about the fantastic views that I completely forgot that I was climbing a hill at the same time. It felt more like flying (hello runner’s high). 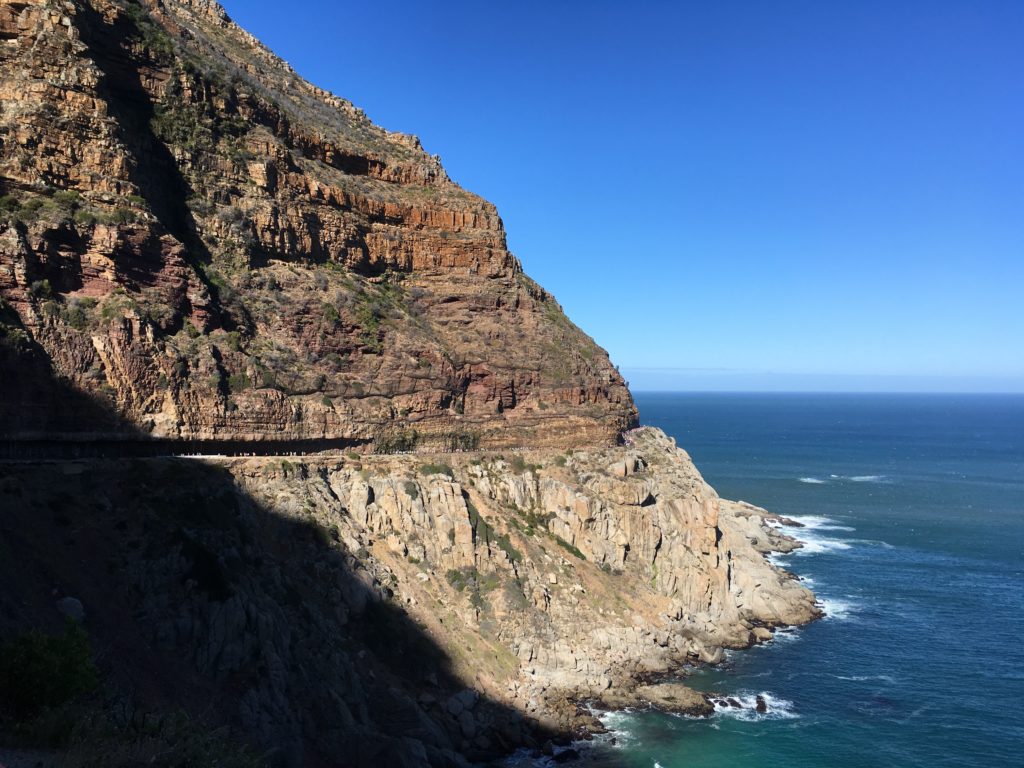 In my selfie-sprint-repeat mode I passed the same two girls three times in a row and they asked me if they should take a picture of me. It turned out to be my absolute favorite. 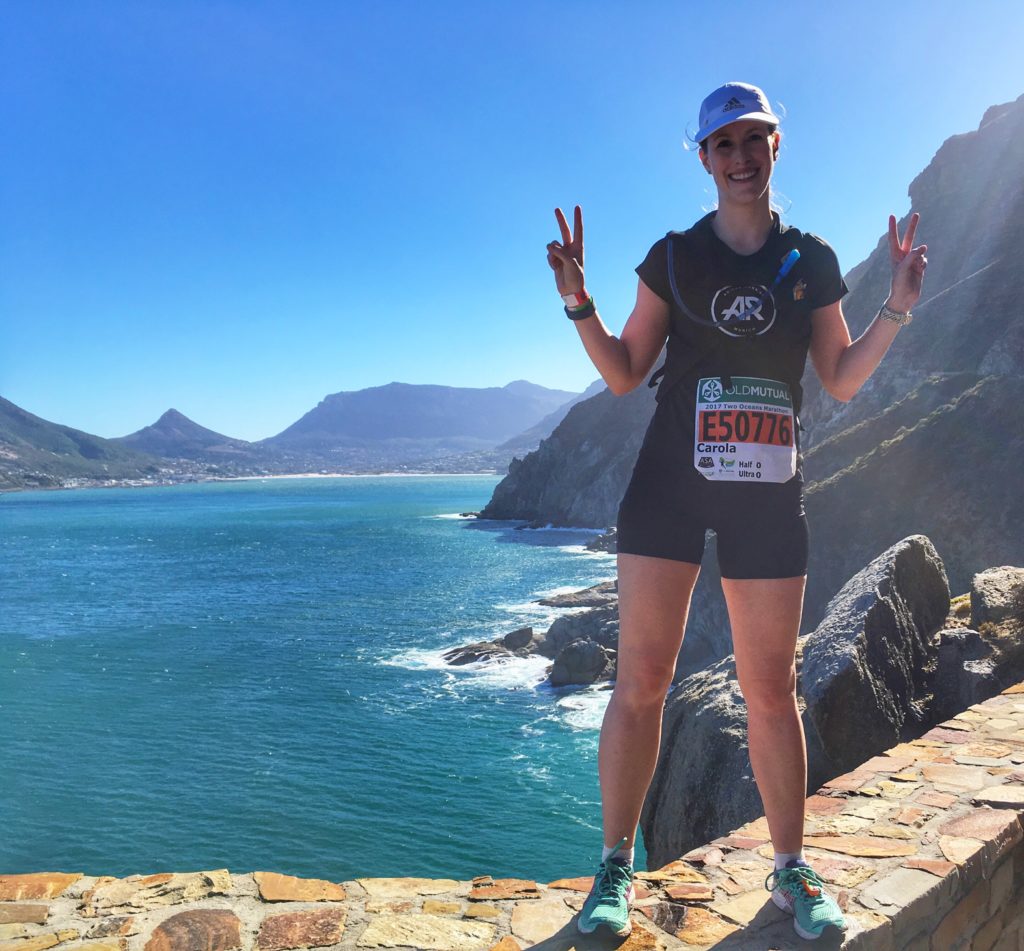 Before I realized I had reached the top of Chapman’s Peak and was ready to descend into Hout Bay. There we reached the Marathon Mark. 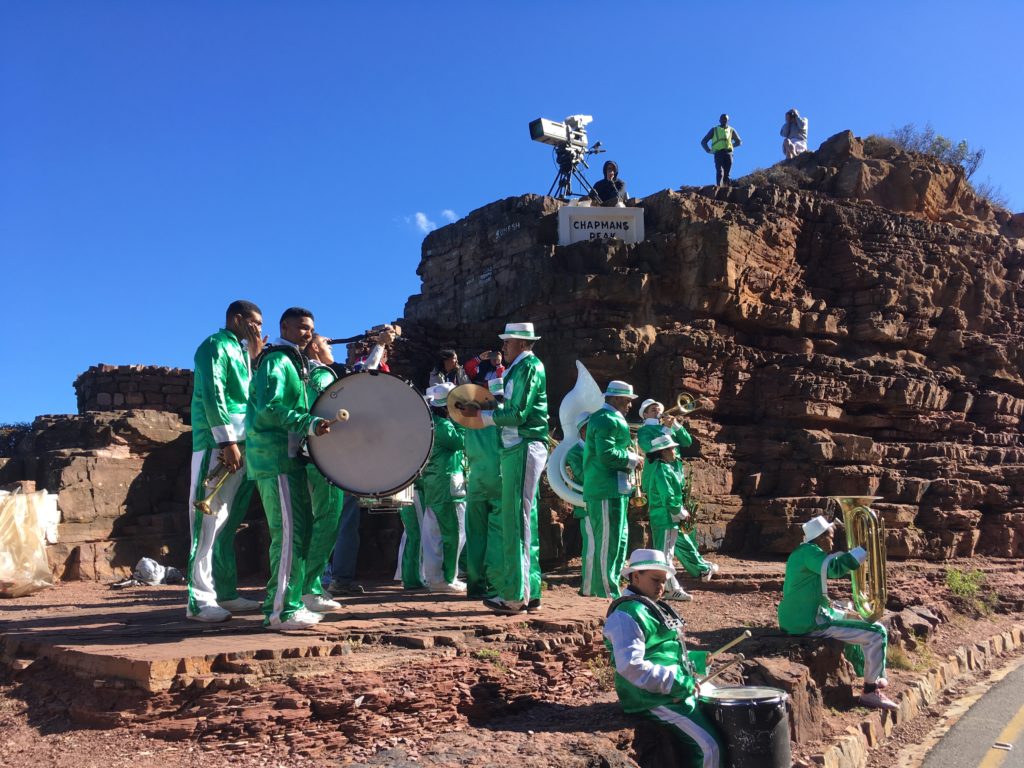 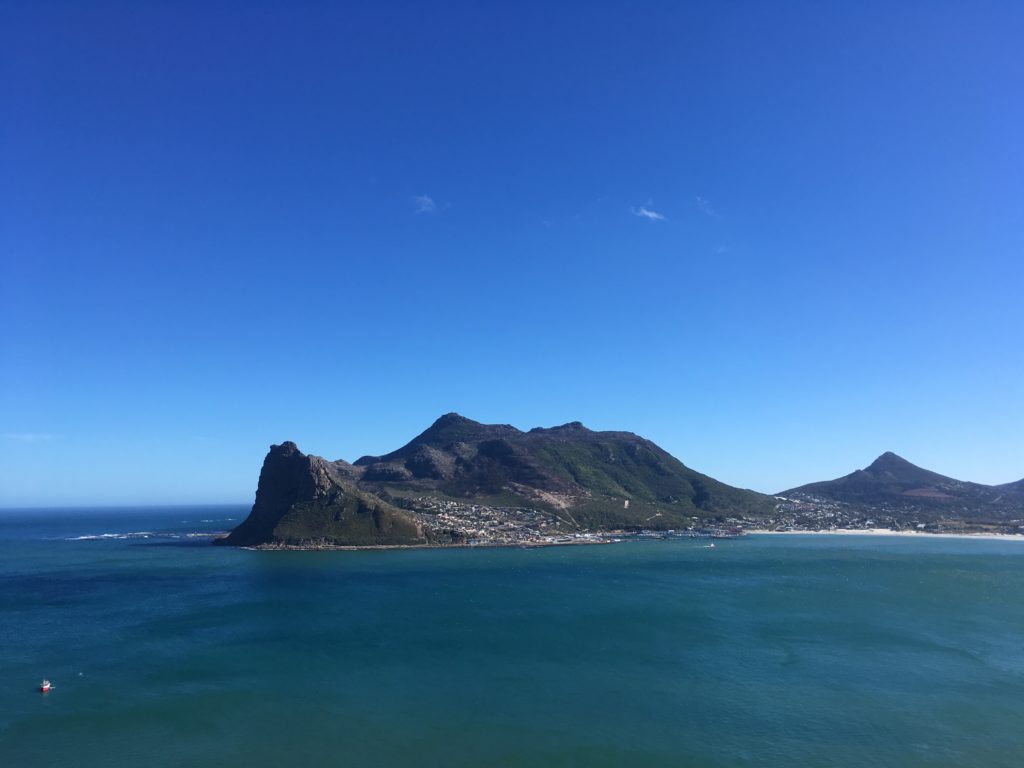 By that time I could already feel the aches and pains that come with running 42 km, but also the chafing and blisters. I decided to take a longer stop to thoroughly rub them down with my emergency trick: a small tube of Elizabeth Arden 8 hour cream. It turned out to be an absolute life saver as I could continue pain free until the end. I reached the Marathon Mark at around 4:45:00, which for me felt very slow, but I still hat 14km to go. This included the grueling Constantia’s Neck, the steepest and hardest of all the climbs. Right at the start of the climb the organizers had set up another food station where they handed us bananas. Timing could not have been better, as I needed the energy. I also could use the steep incline to power walk and eat my way to the top. From there it was 10km mostly downhill. The mostly was not always, and so I soon found myself power walking up some inclines again. Suddenly the 6:30:00 bus passed me. Not a real bus, but a pace group, headed by a girl called Louise. ( I have no idea why the South Africans call a pace group a bus, but I love the name.) As this was my goal time I panicked. Was I really too slow? Will I make my goal time? I decided not to hop onto the bus, but to run ahead of them. At my next selfie stop they caught up with me again. Damn it, I thought, no more selfie stops. 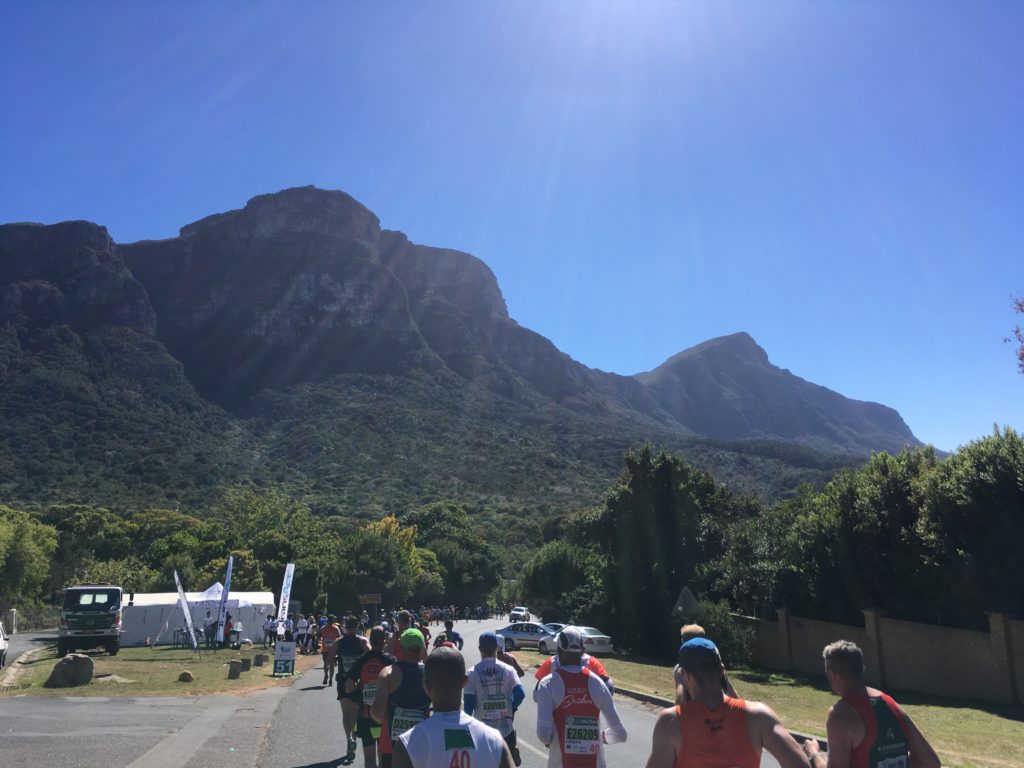 I pushed myself to run faster than Louise, which was quite hard due to the rising heat. With only 2km to go until the Two Oceans Marathon finish line I was fully exposed to the sun. Now I was really happy that I had bought that white hat at the expo. When I reached the lawn of the University where the last 100m were I could already see Richard waving at me from the VIP area. Of course he had already finished 1.5 hours earlier and was now enjoying his Sauvignon Blanc. He handed me his Adidas Runners flag for the last meters. 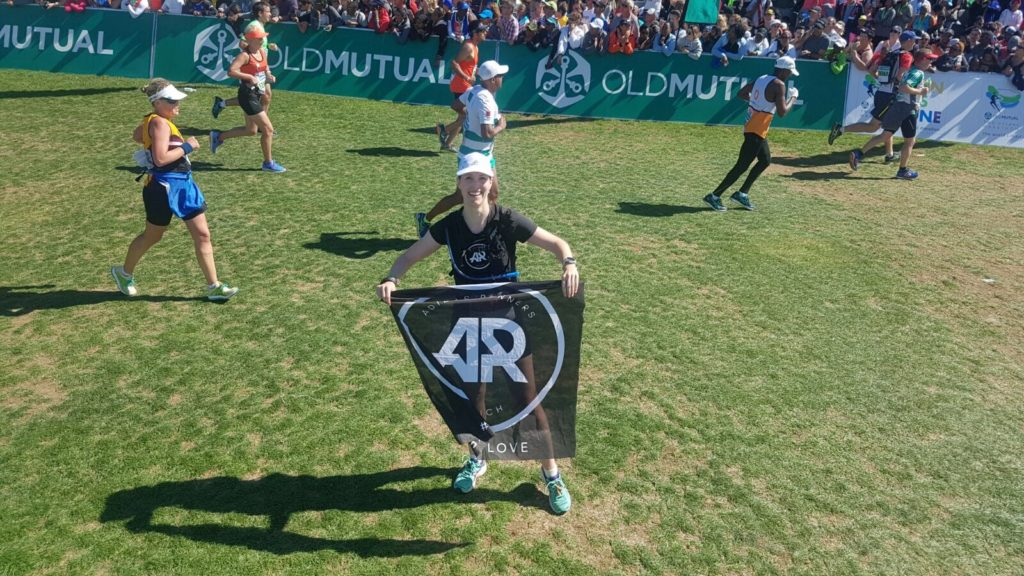 I finished the Two Oceans Marathon with the biggest smile on my face (and relatively fresh legs) after 6 hours and 26 minutes. It then took me a while to find the bag pick up zone and to make my way back to the VIP tent. But I made it in time to grab a glass of wine and see the final minutes of the race. 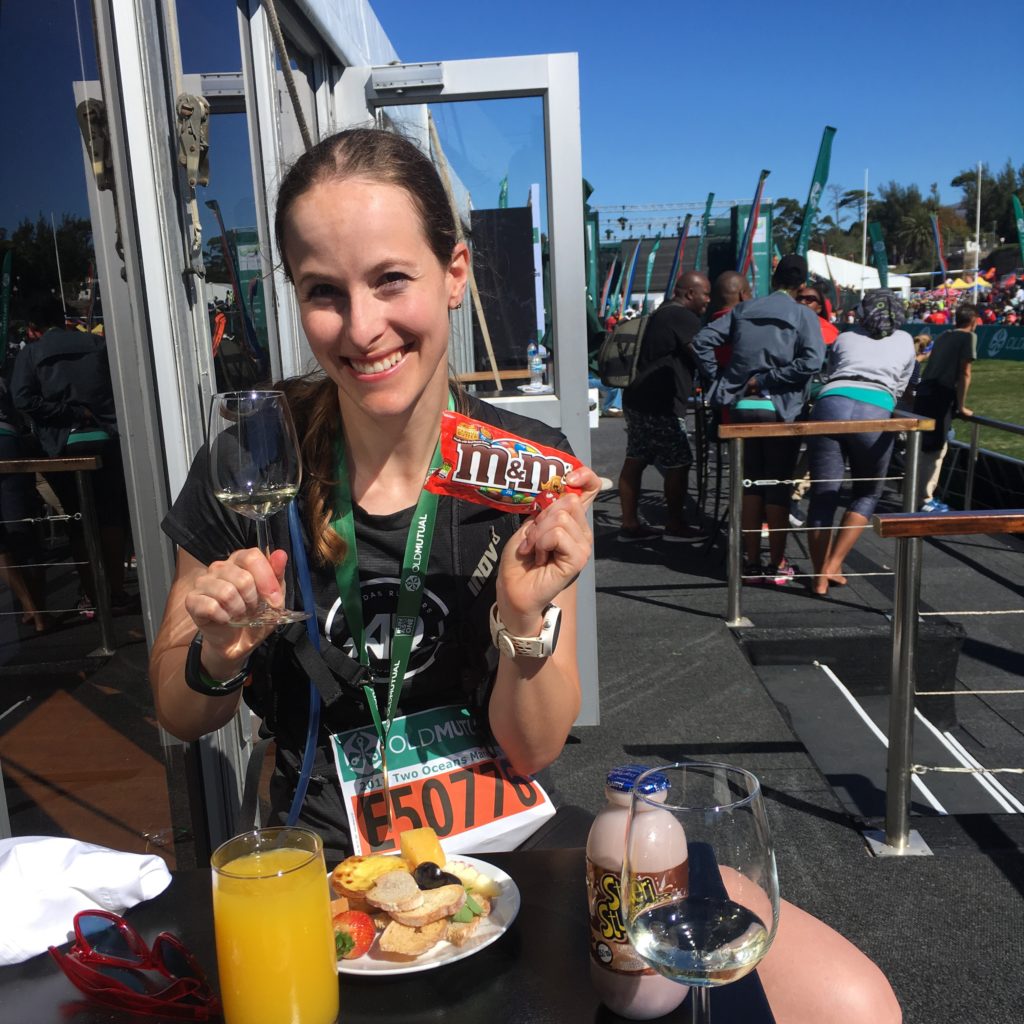 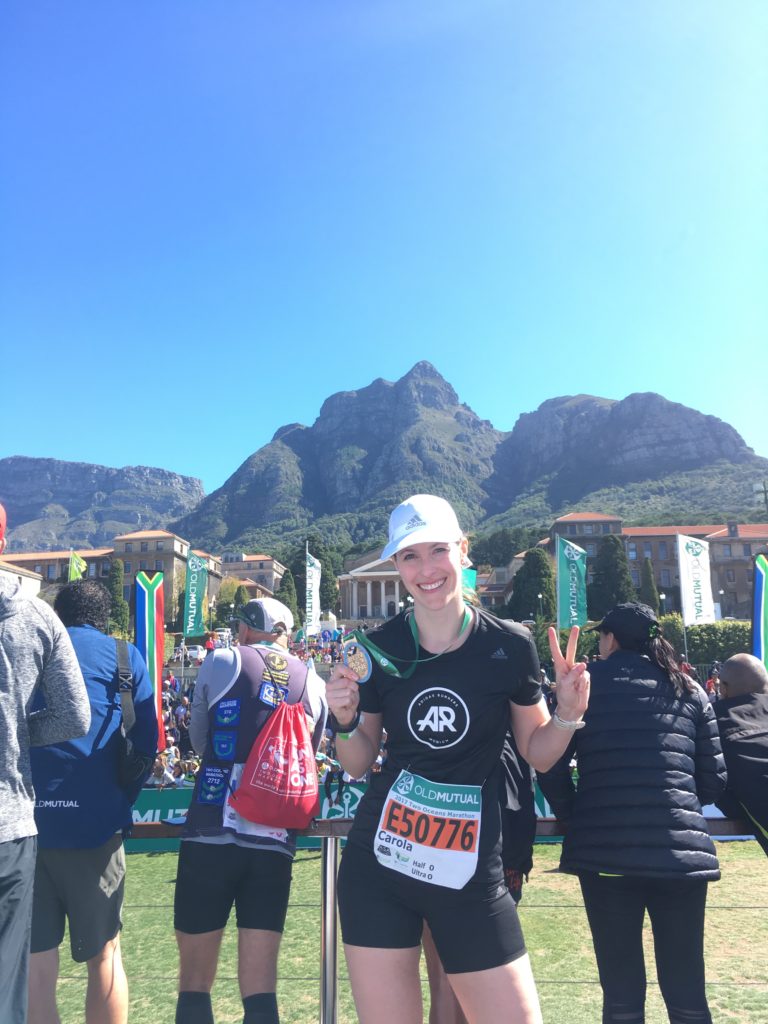 With two minutes to go until the 7 hour cut off time the final sub7 bus arrived, causing the crowds to cheer like crazy. In the last minute people were sprinting towards the finish line to make it in time, and the first ones that did not make it were absolutely devastated. 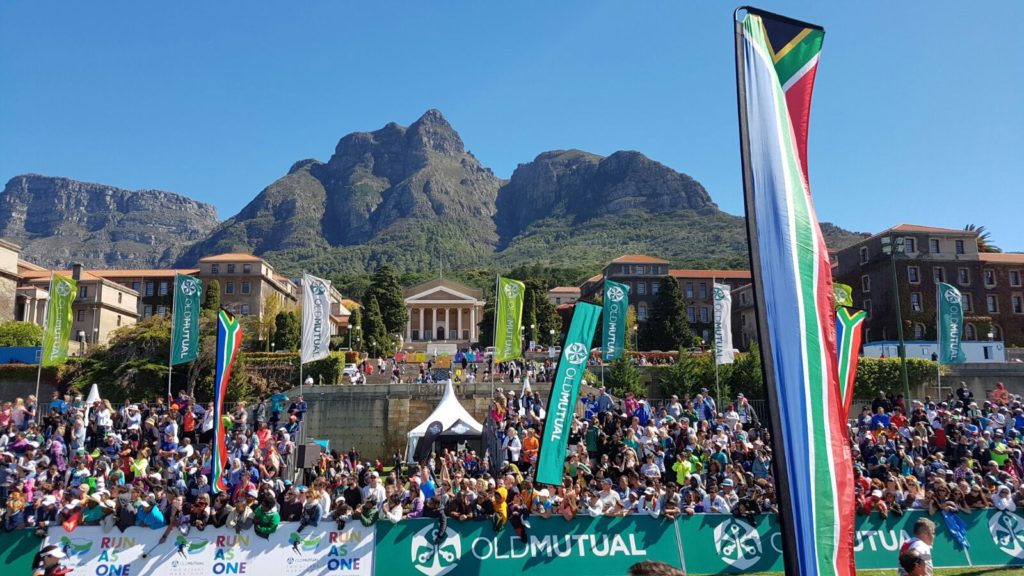 I could feel their pain. Running 56km and then not finishing and getting a medal is just incredibly sad. Especially as the Two Oceans Marathon medals are really nice: every hour the design of the medal changes to gold, silver, Sainsbury, bronze and blue. Even though mine was blue I still felt like a winner. But I definitely decided on the spot that I would come back to get a bronze one. Because the Two Oceans Marathon is just the most beautiful Marathon in the World!   Are you thinking of running the Two Oceans Marathon? Read my objective race review here. 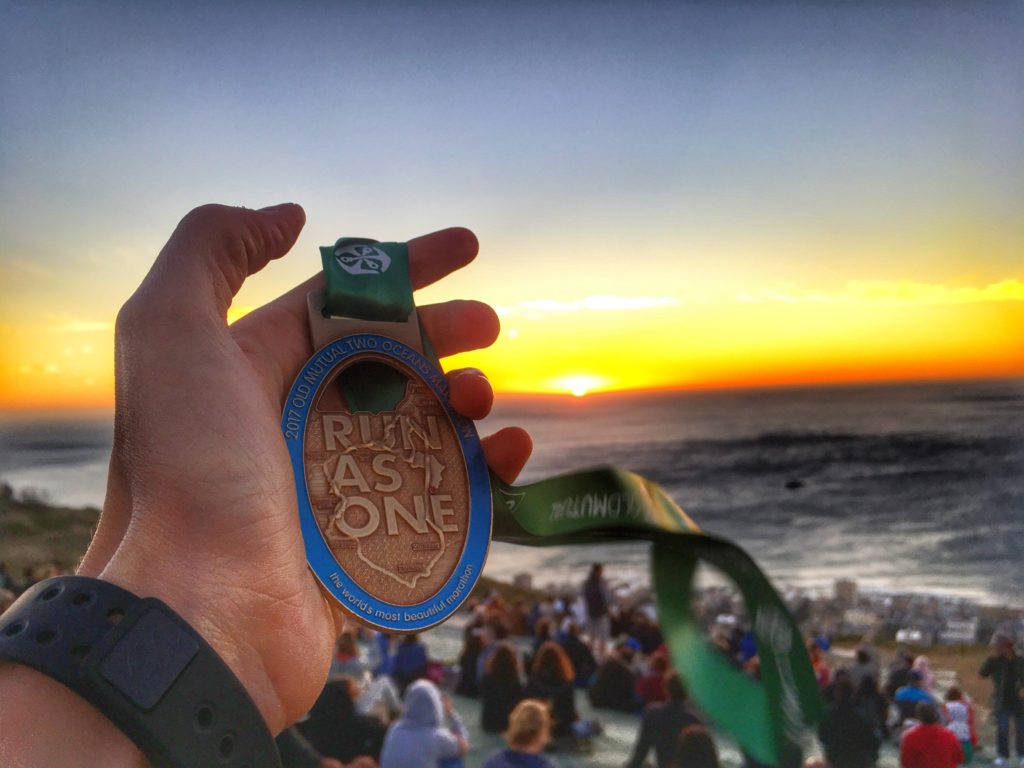