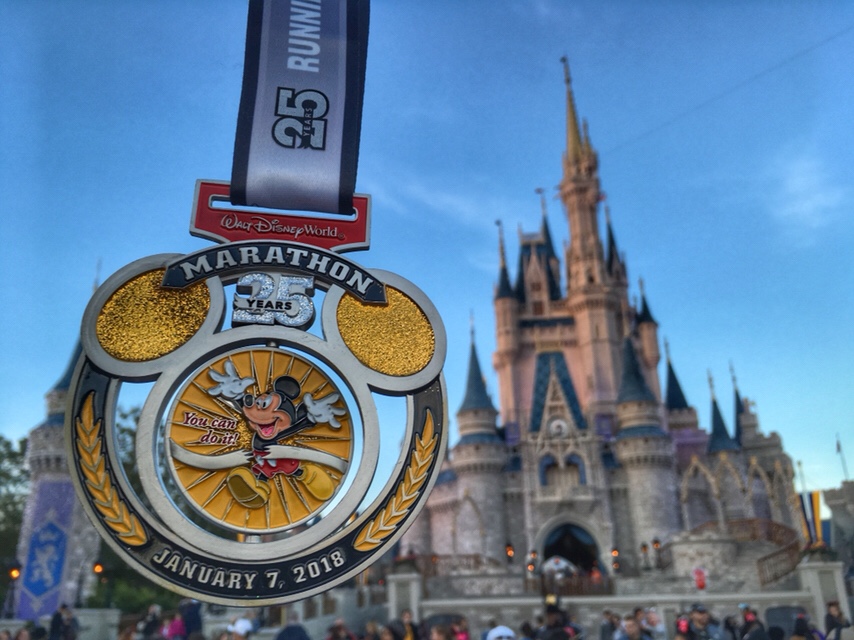 Orlando has a big airport and is very well connected, so it would be a good option to fly there. But you could also fly to Miami and then take the bus (which I did) or drive to Orlando. If you decide to stay at a Disney Resort you can easily get around the parks by bus. If you don’t want to wait, Uber is also a good choice. However if you stay outside you need a rental car to get around. Signing up for the race is easy and pretty straight forward. However certain races will sell out really quickly like the Dopey Challenge. Make sure you update your historic Marathon time online ahead of time.

Bib Pick Up takes place at the ESPN Wide World of Sports. Make sure to be there on time as it can get busy. There is also a small race expo where you can buy last minute supplies. But the most important part is the Disney Merchandise section, where you can spend lots of money on everything a Disney runner can imagine. This is also where I bought my cute race outfit.

The start line is at Epcot, and as the start is really early at 5:30 a.m. there is no bus transportation that early. So you have to go by car, taxi or Uber. But make sure you go there early, as it will be quite busy. I left my hotel at 3:30, arrived at 4, which gave me enough time to walk to my corral at 4:45. And it is a long walk there. If you have booked a special package there is a big hospitality tent in the start and finish line area, where you can sit down and stay warm. We normal people had to wait in the cold. One thing that really stood out was the number of porta potties at the start line as well along the course. There were so many I never had to wait longer than 5 minutes.

The Disney World Marathon course covers all four parks as well as the ESPN Wide World of Sports Complex. In between it goes on the back roads of the parks, which is sometimes really monotonous and boring. It starts in Epcot and heads north for around 5 fairly boring miles until it reaches the Magic Kingdom. There it goes through Main Street USA, Tomorrowland, Fantasyland, through the Disney Castle, then to Frontierland. It then continues another 5 boring miles south towards Animal Kingdom, where you pass through Africa, Asia and Dino Land. The next section is the ESPN Wide World of Sports, where you run 5 km in between baseball pitches and football fields. At around 36 km you reach the Disney Hollywood Studios. From there it is only a 3 mile run past the famous Disney Swan and Dolphin Resorts back to Epcot. There are plenty of refreshment stations along the course with water and Powerade. They also hand out bananas and jelly beans twice as well as Vaseline for runners with chafing problems. But the most important stops are the Disney Character stations. The wait for me was less than 5 minutes, so I took plenty. Definitely the best part of the race.

After the race you are directed towards the start line area, where you get powerade, water as well as a food package with chips, Oreos and a banana. You also have the opportunity to take lots of pictures with more Disney Characters and your awesome medal.

A trip to Disney World would not be the same without a trip to the parks. There are four parks in Disney World as well as a few others in the Orlando area. If you are planning on staying in a Disney Resort take advantage of the early hours for resort guests. If you are willing to spend the money you can get a fast pass to skip the line. At some attractions the also have single riders lanes which are usually much faster than the normal ones.

Epcot is a country themed park, with countries like Italy, France, China, Japan, Germany etc. represented there. It also has some other attractions and rides.

Magic Kingdom is the classic old school Disney park with Main Road USA, Tomorrowland, Fantasyland and Frontierland. When you are there make sure to check out the awesome shows “Happily ever after” and “Once upon a time” where a light show is projected onto the famous Disney Castle. Fireworks included.

Disney’s Hollywood Studios features several fantastic rollercoaster rides as well as a new Star Wars section where you can meet all your favorite Jedis.

Animal Kingdom is the newest addition of Disney parks. The themes are Africa, Asia, Dinoland and Pandora, the land of the movie Avatar. My favorite attractions are there: the Everest rollercoaster ride and the Avatar banjee ride. This one is an absolutely spectacular virtual reality experience where you ride a dragon from the movie Avatar. The wait is generally not less than 3 hours but it is absolutely worth it. If you are done with Disney World there are also other parks worth exploring: