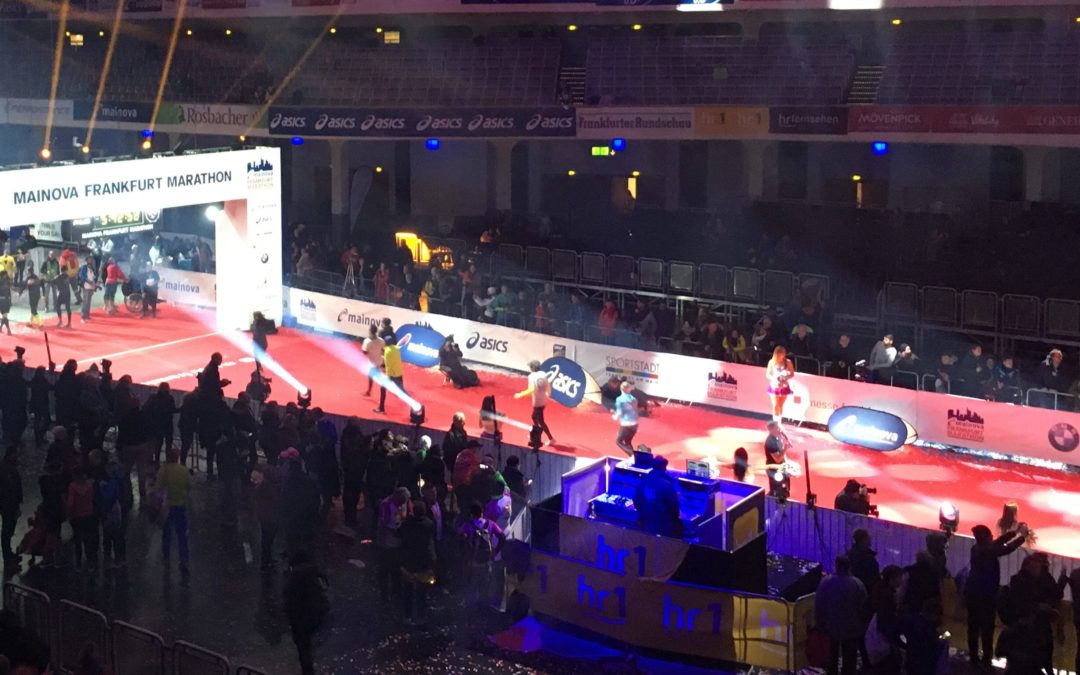 Frankfurt Marathon is the oldest road Marathon in Germany and always takes place at the end of Oktober. (This is actually very nice as it is generally the Sunday when Germany changes from summer to winter time and you get one hour of extra sleep.) Besides the Marathon the race also offers a relay marathon which is really popular as well. I ran the Frankfurt Marathon as my last and final Marathon of my 12 Marathon fundraising project. Luckily my friend Geo accompanied me and filmed me the whole race. Here you can check out his awesome youtube video including the amazing finish line inside the old Frankfurt Fair hall.

Frankfurt is probably Germany’s best connected city. It has Germany’s largest airport with direct flights to different places all over the world. It also is very well connected via train and bus. It as a good public transport system with trams, suburban trains and underground. The best part: it is not very big, so everything is really close.
The start, finish and expo are all located in the Frankfurt Fair area. It is just one stop from Frankfurt main station, or a quick 15 minutes walk. I literally walked back to the main station after the Marathon because I had to catch my train. But also if you need to catch a flight, it is super easy, as trains to the Airport from the main station only take 15 minutes.
I did not run the Frankfurt Marathon relay, but my friends told me that also the relay handover points were really easy to reach with public transport.

Expo and bib pick up

The expo and also the bib-pick up are located in one of the halls of the Frankfurt Fair. The bib pick up queues can be very long, especially Saturday around noon after the official shake out run, also called Pretzel Run. I went there right after I collected my Pretzel run medal and was fine. But my friends that went just 15 minutes later had to wait for ages.
The expo is really large and you can buy everything you need there. The main sponsor offers everyone free non-alcoholic beer, so make sure to not miss that. Also the goodie bags contained lots of (sometimes random) products from a consumer goods sponsor.

The benefits of having the start line next to the Frankfurt Fair are obvious: The bag drop is inside, there are real toilets and you can stay inside the fair building until right before the start. This was basically what I did, as it was really cold the day of the Marathon. There are also some food stalls if you want to buy a last minute breakfast. 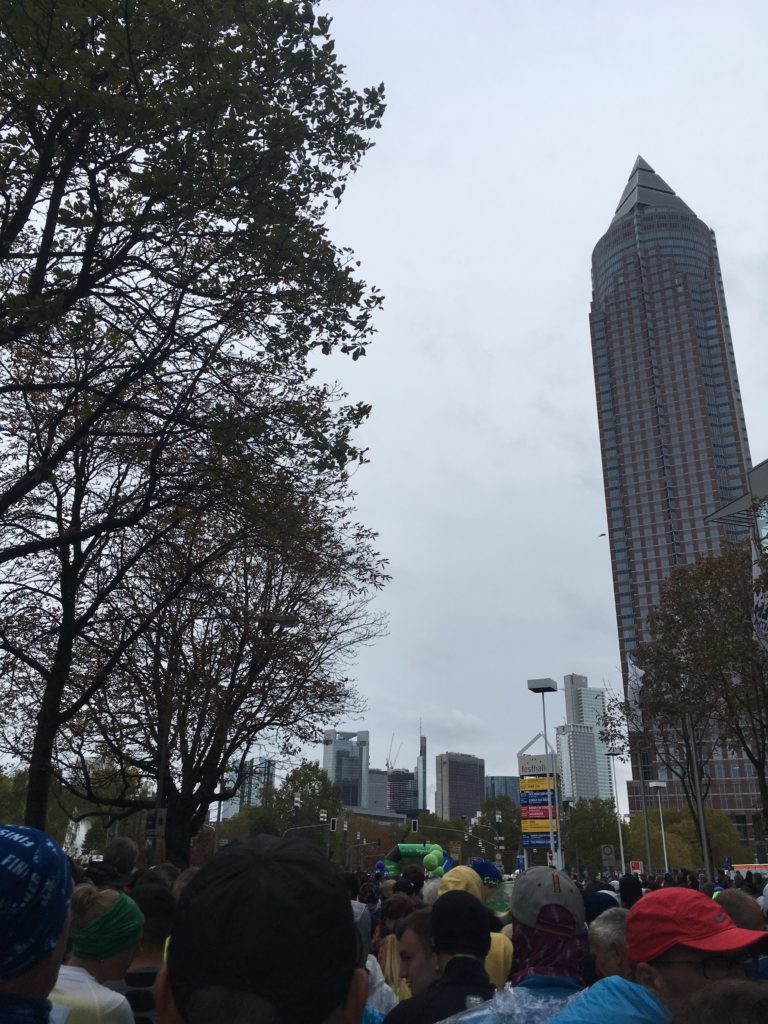 At the start of Frankfurt Marathon

After the start of the Frankfurt Marathon at the Frankfurt Fair the course takes various loops around the city center. This can be quite confusing as everything looks the same because of the skyscrapers. I never really knew where I was right now. After around 10 km you cross a bridge to the other side of the Main river, from where you have an awesome view of the Frankfurt skyline. The next 20 km are unfortunately a bit boring. the course heads West on the south side of the river. It then crosses the river again on a motorway bridge and heads back East. These areas are sometimes quite rural and empty, as not a lot of spectators make their way there. But on the positive side: the course is really flat and fast, and you can really run fast on these stretches. 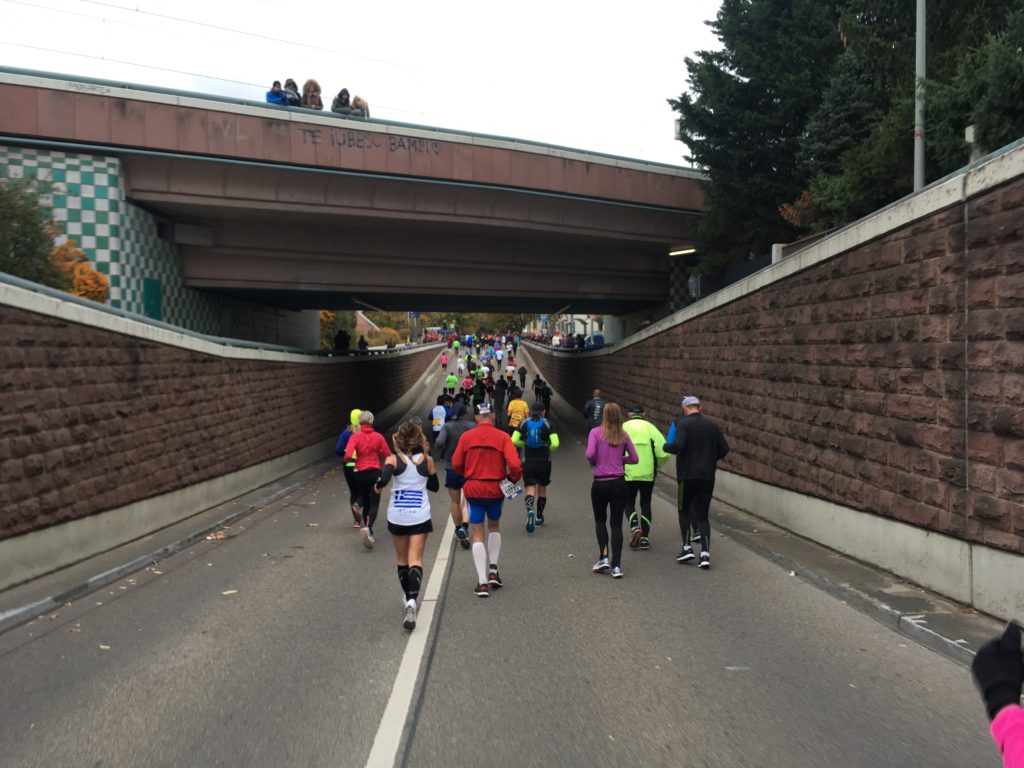 At km 35 you are back in the city of Frankfurt and pass the old Fair Hall, where you can nearly smell the finish line already. But first you have to run a few confusing loops around the city center (again). The final 200 meters will take first across the original start line, before you turn left into the old Frankfurt Fair Hall. Inside you will run on the red carpet towards the finish line. The ambiance there is amazing. Spotlights everywhere, and spectators right and left. Even though the course is a bit boring, the finish line is absolutely worth it.
The course is well equipped with refreshment stations every 2.5 km. Every  5 km you will also find hot tea, bananas and porta-potties.

After the finish line in the Fair Hall you are directed outside again where you will get your medal, food, drinks. You then have the chance to pick up your bags and take a shower. The showers are located in the basement of the fair and are just plain shower containers, but they are better than nothing. Make sure you bring a towel in your drop bag. Unfortunately there are no hair dryers, and it can be quite cold in there. So make sure you don’t catch a cold afterwards.
Once you are settles you can go back into the old Fair Hall and watch other runners cross the finish line. It is really worth checking it out. 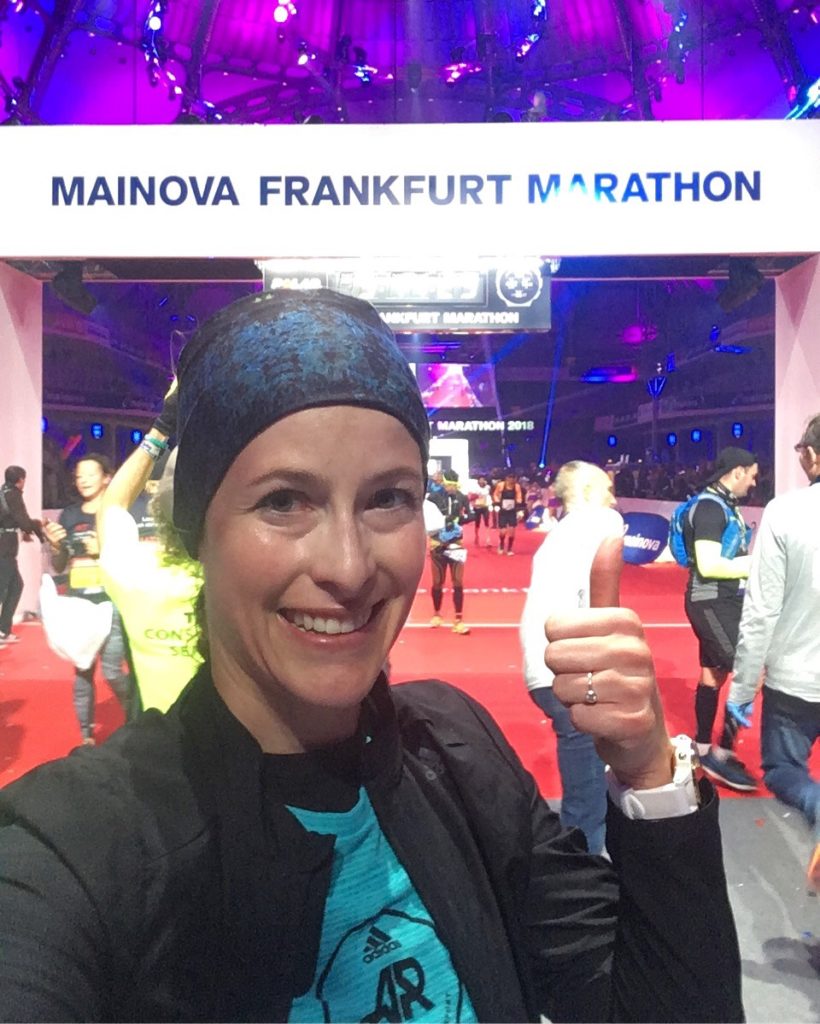 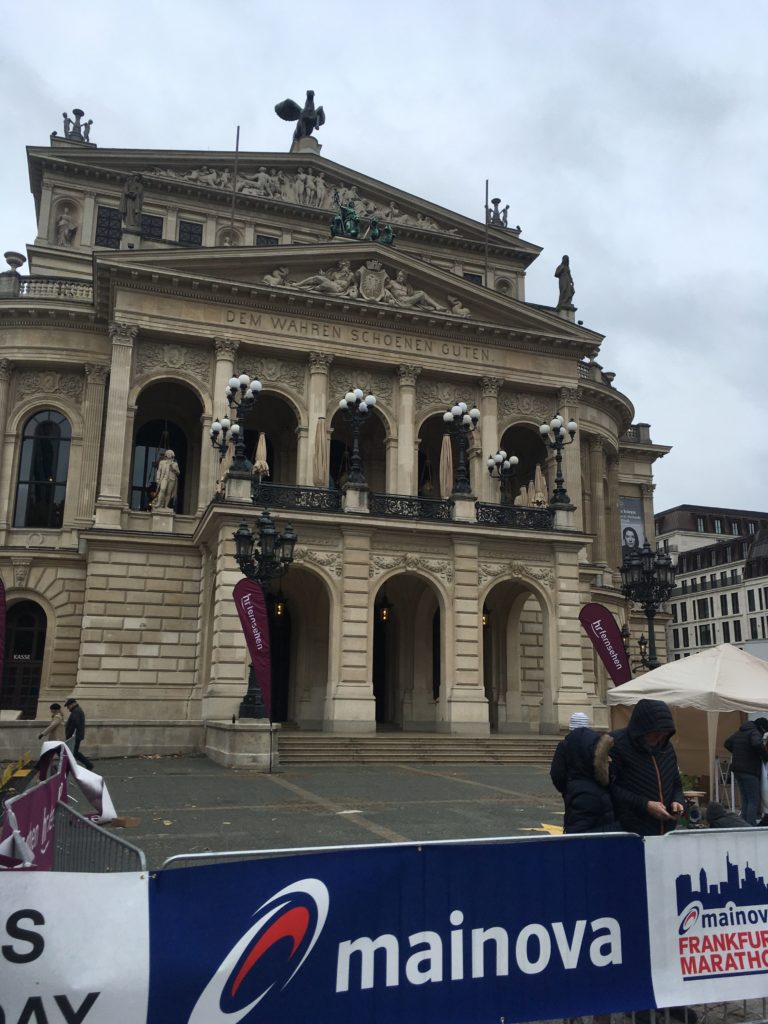 The old Opera of Frankfurt during the Marathon