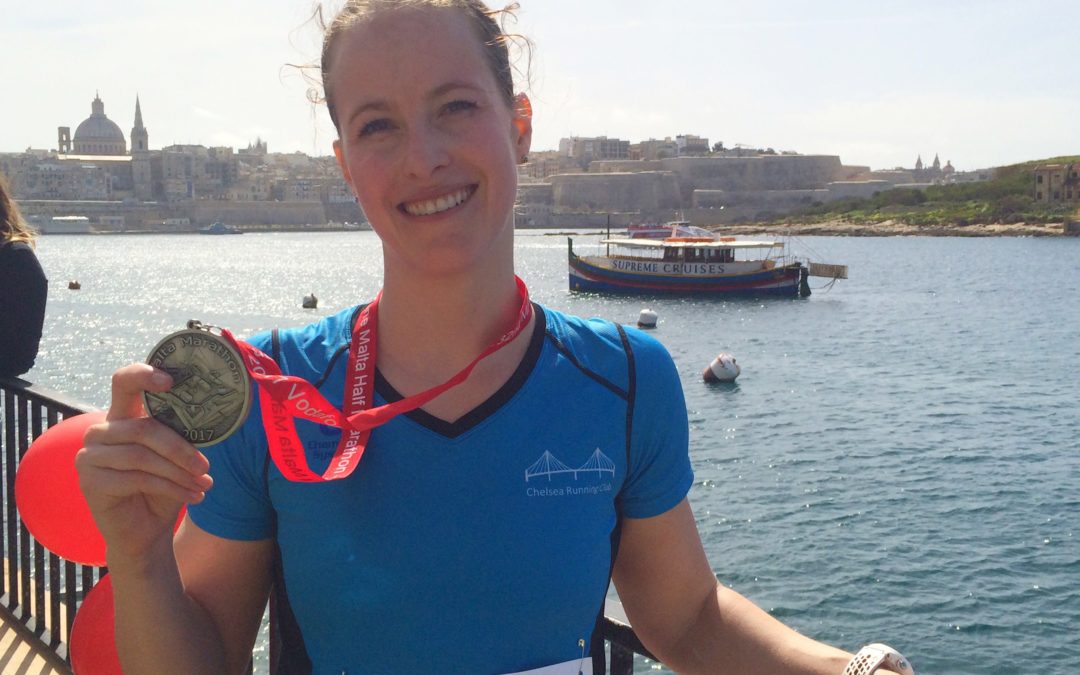 When signing up for the Malta Marathon my Dad and I had one main criteria in mind: Sun! We both hate running cold races, so we were looking for a location with predictably nice but not too hot weather, relatively low number of participants and good food. And all of that just a weekend trip away.

Turned out that the Malta Marathon on March 5th 2017 provided all of that. We were more than lucky with the weather with perfect sunshine the whole weekend. We spent Saturday exploring the city of Valetta, which is a Unesco world cultural heritage and was absolutely beautiful.

On race day we had to get up early to catch the buses that would take us to the start up in M’dina, the old medieval capital of Malta. My Dad came up with the strategy for the race: as the first half is just downhill, run this part as fast as possible.

And it turned out that this strategy worked really well for me, but not for him. While we were running shoulder to shoulder for the first 10k he then suddenly hit the wall in the upcoming heat and had to slow down drastically. I wanted to stay by his side, but he told me to go ahead. I managed to finish with a new PR of 1:55:00. My Dad however finished in 2:04:00, nearly 7 minutes slower than his previous Half Marathon.

My friends Tina and Fabian also raced that day. Tina finished the full Marathon in under 4 hours and Fabian finished his first Half Marathon in 1:36 with just minimal (close to zero) training. I wish I had these natural capabilities!

As Malta is an island in the Mediterranean, traveling there by plane is the most advisable. Unless you are an avid sailor or swimmer. As it was low season there were not a lot of flight going to Malta per day, so you want to make sure to book your flight early. From the airport you can take a taxi for a fixed price. As the finish line is in Sliema I recommend staying there too, also because the Ferry to Valetta is also leaving there.

The Bib Pick-up was located at the Le Meridien Hotel in St. Julians, just a 15 min walk from Sliema, where the finish would be located. Everything went relatively smoothly, although there was some waiting time on Saturday. There was no expo at all, which was probably due to the small size of the event.

The start of the Malta Marathon was a big public parking area close to M’dina, the old capital of Malta. The Marathon started off around two hours before the Half Marathon, so the start area was not too crowded. There were enough porta potties, and even a small cafe where you could sit down. The race course was really split up into 3 sections: The first part was nice downhill bit, which was mostly traffic free. After 10km we reached the outskirts of Valetta. The next 8km were relatively hilly and hard to run. There was also quite a bit of traffic, as just one lane was reserved for the runners.

The last 3km were around the bay of Valetta to Sliema, and they were by far the best part. Perfect views onto Valletta, spectators on the side. It has gotten quite hot until then, but the finish line was close. Along the course there were enough water stations. I really liked the fact that they handed out sports drinks in small bottles which made it easier to drink. There were also a few sponge stations and and bands along the way.

The Finish Area of the Malta Marathon was way too small to accommodate all the runners It was a constant traffic jam around the food and water stations, and the exit was so narrow that only one person at a time could fit through. The area outside was also really packed. Even though it was not allowed to park there a lot of cars were still there and did not get towed away. The bag pick up was also badly organized. The bags that were dropped before the race were just lying out in front of the DHL trucks. The volunteers tried to find your bag, but a lot of runners just looked for them themselves. Luckily my bag was still there and I found it after only two minutes.

Valletta is a Unesco World cultural Heritage site for a very good reason. It is absolutely beautiful! Just walking through the streets was amazing. The Grandmaster’s palace was closed, but we went to see St. John’s Co-Cathedral which is absolutely beautiful and stunning on the inside. Unfortunately I only had a weekend there. Otherwise I would have loved to see more of the islands. I swore to especially come back to the island of Gozo and see the Azure Eye, but unfortunately it was destroyed in a thunderstorm a few days later.