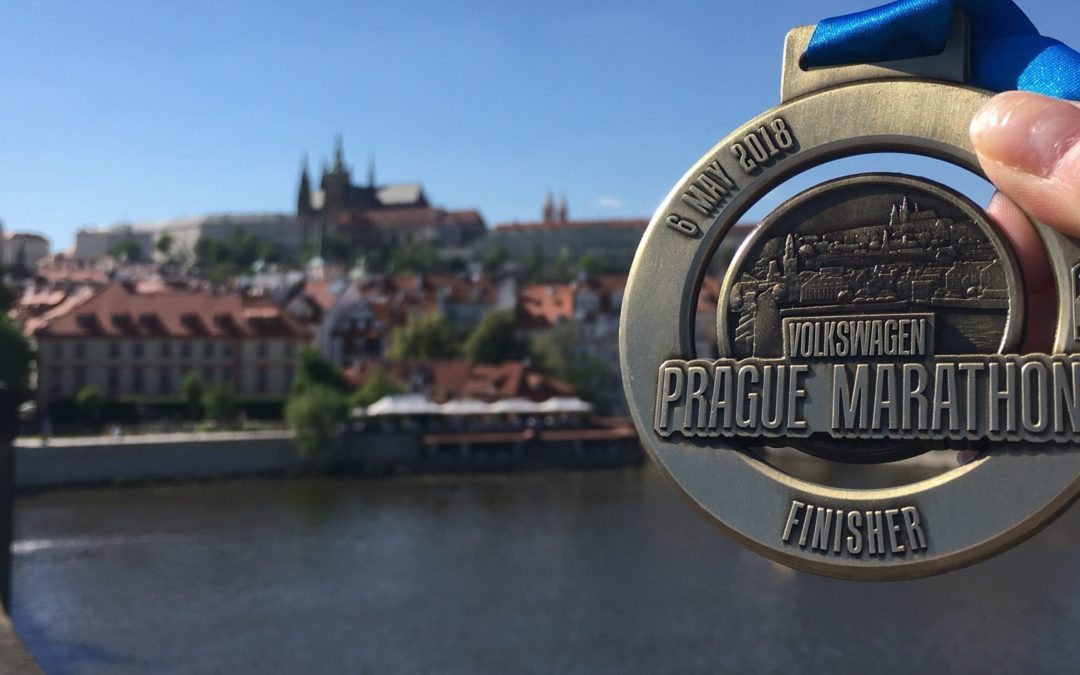 Prague Marathon is the biggest and most important marathon of the Czech Republic. It is always held in early May, and features the highlights of the wonderful old town. Prague Marathon offers the classic distance as well as a two Half Marathon relay race.

I ran Prague Marathon as marathon no. 6 of my 12 Marathons in 12 months project and I really loved it, except for the cobblestones and tram tracks. But that is something you probably have to accept when running in an old historic city like that.

Traveling to Prague is quite easy and convenient. Prague has a major airport, and also an efficient public transport system with Metro and trams. There are also train and bus connections. I personally took the train back home to Austria, and was a bit disappointed. There was a delay, and we had to go to a different train station to catch our train. But the announcements where only made in Czech and I did not understand a word what was going on. Luckily there were some friendly Czech people who helped me out.

The Prague Marathon expo is located at the old historic exposition grounds in Prague called Vystaviste Praha. It is probably the prettiest marathon expo I’ve ever seen as it is an absolutely stunning old building, built for the Jubilee exhibition in 1891. The expo itself is fairly big, with several stalls where you can buy shoes, running nutrition an other gear.

The marathon village is set up in and around the Old Town square Staroměstské náměstí where also the famous Astronomical Clock Tower is. However the bag drop is a bit further away. The starting corrals are located in a street that has a sharp corner. It is a bit crowded there, and the starting corrals feel a bit packed. And if you are starting in the back of the pack, you might not even see the start line from your corral. There are porta potties around the start, but as always, the queues were quite long.

The race course first takes a loop in the old town of Prague, crossing over the famous Charles Bridge. It then heads East along the river and back. (This part will actually be run again in the end). It then goes through the old town again, before heading south along the East bank of the river. There you will also hit the Half Marathon mark. After that it goes to the West bank of the river, down and up again, before continuing along the river to the East (the part you’ve already run before) and back to the finish line.

I was not a big fan of the Prague Marathon course as involves quite a lot of turns, ups and downs, and lots of cobble stones and tram tracks. I actually fell twice. But what I really loved was what was on the sideline fo the course. The refreshment stations were awesome. There was water, Gatorade, bananas and oranges. But I especially loved the wet sponges they had at nearly every refreshment station. Also there were enough porta potties on course and a lot of first aid stations.

The Prague Marathon finish line area is where the start area is. You basically walk back the same way you came from. With a lot of spectators and not a lot of space the area feels quite crowded.

Prague offers a lot of interesting sights to see:

However, I think that Prague has a tourist problem. And with that I mean tacky (mostly) British hen and stag dos or birthday parties, that are only looking for cheap alcohol. There were a lot of drunk people on the street the morning I walked to the Marathon. Also the whole old town does not have any nice shops any more, just tourist traps where you can buy low quality products for high prices.
Personally I find the Prague old town extremely beautiful, but just too touristy for my taste. However if you are up for a good party after the Marathon, Prague might be a good choice.