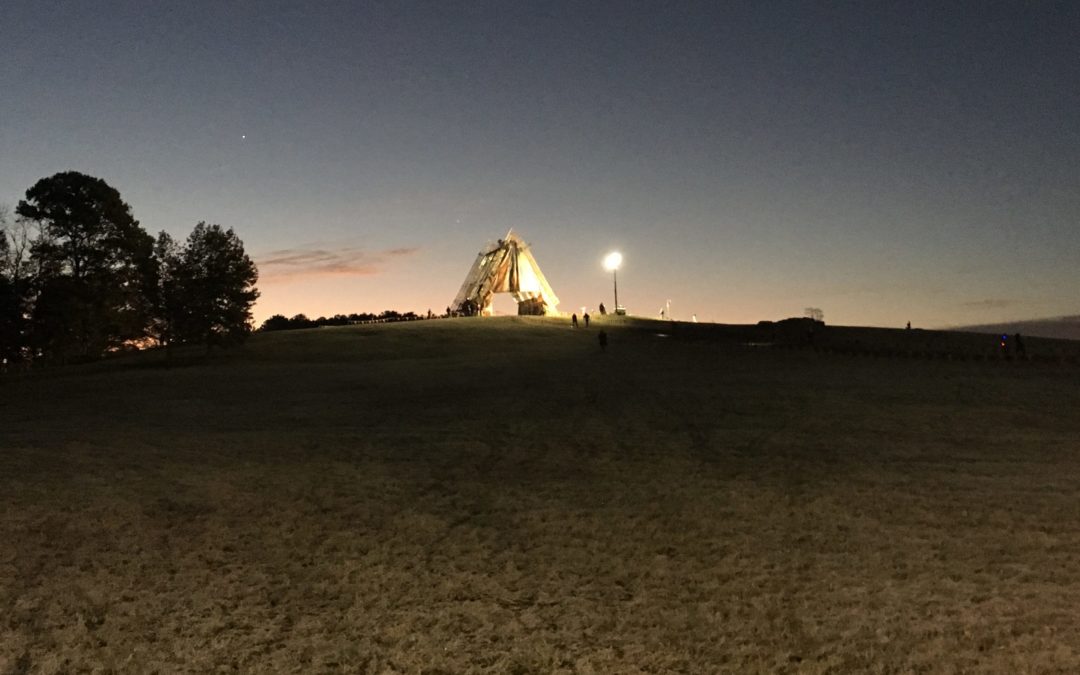 I ran World’s Toughest Mudder for the first time last year in Las Vegas, and reached my goal of running 50 miles and earning a brown bib. (you can read about my experience here) I was also immediately hooked by the spirit of teamwork and camaraderie and decided to sign up again for the new race in Atlanta. 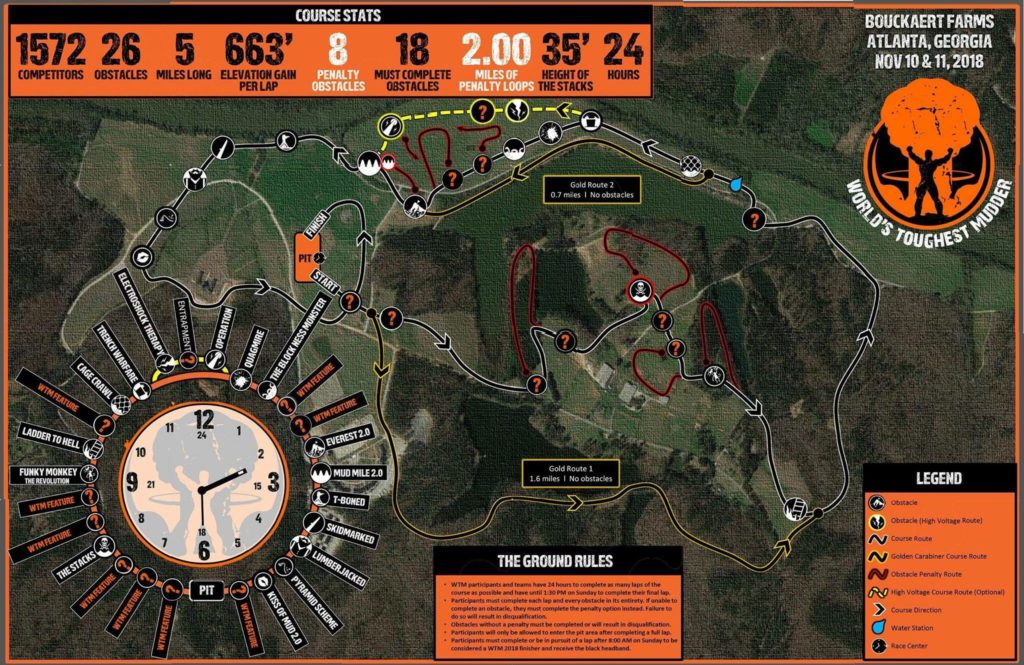 When people first heard that the race would move to Atlanta some were a bit disappointed. They thought that Atlanta had a climate that was too “hot” and that the race should go back to original muddy and freezing cold venue in New Jersey. It looks they got what they wished for. The weather forecast for Atlanta was predicting sunshine but freezing cold temperatures. For the day before the race, which is generally pit load day, it was supposed to rain heaviliy. And this is also what happened. On pit load day a lot of the pit spots had big puddles of water. And soon after pit load the pathways between the tents were just a muddy mess. This basically also was how the course would look like the next day. First muddy and then frozen muddy.

A week before I set off to World’s Toughest Mudder I had checked the weather forecast and ordered some extra gear to combat the cold and the muddy terrain. An extra thick wetsuit with a hood, and an extra base layer with a hood. The package arrived on time, but unfortunately with the wrong content in it. So when I packed for World’s Toughest Mudder I was only prepared with the same gear from last year’s event, where the lowest temperatures had still been higher than what we were expecting in Atlanta.

At the start line of World’s Toughest Mudder 2018 everything still looked nice and pleasant. The sun was shining, there was not a single cloud in the sky. An everybody seemed to be happy and relaxed. We listened to the inspiring speach of Sean Corvelle, the traditional bagpipes of Jon Copper, and then we were sent off. The first hour of the race is called the sprint lap because obstacles are generally closed. So everyone took off as fast as possible. I realized quickly that I was dressed too warm, and that I would be overheating in the sun. This got definitely better on lap 2 and 3 when obstacles where open. I managed to get a 4th lap in before sunset at 6 pm.

After sunset the temperatures dropped pretty quickly. I had to put heat packs into my wetsuit to stay warm. Unfortunately I went through most of my heat packs in that one lap and was therefore not sure how many more laps I could do. I also decided to take the electrical route as it meant I could skip several water obstacles and because I knew I could do it without getting electrically shocked. On the end of my 5th lap I also bumped into Anne Champagne, an elite racer who was probably several miles ahead of me. She was severely hypothermic and shivering heavily. At one point she could not walk any more and two guys helped her – one on each arm – back to the pit area. What I saw made me thinking. I had one thick wetsuit and one set of handwarmers left, that I could use. This could maybe get me through one or two more laps before I would get too cold. I would then have close to no chance of finishing a final lap after 8 am to be counted as a 24 hour finisher. And so I decided it was not worth the risk. I stopped after my 5th lap, got undressed and snuggled up in my cosy sleeping bag for the rest of the night, wating for sunrise and my final lap. 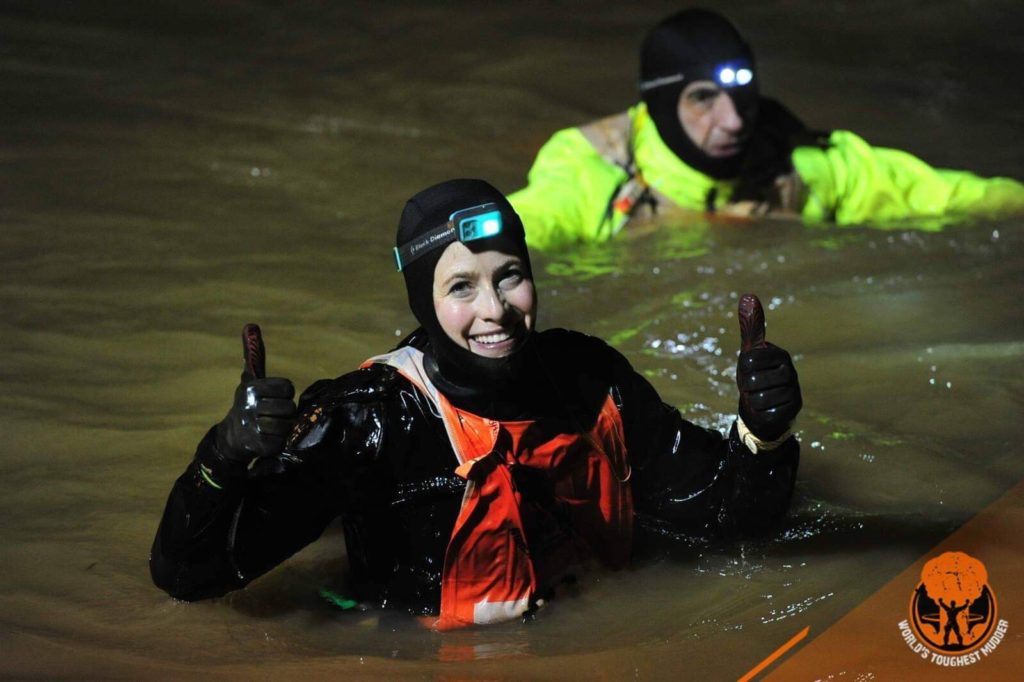 When hell froze over*

While I was lying in my two sleeping bags I could not sleep. The music and the MCs in the race village were too loud, and my adrenaline levels were too high. In addition to that, I was coughing heavily with mucus discharge. I was told later that this is completely normal when you breath heavily in cold air for too long. So sleeping was basically impossbile. But at least I stayed warm in my two sleeping bags with extra hand warmers inside them. In the middle of the night I could hear the announcement of the MCs that some of the obstacles were closed due to frost and ice. At first, it was just a few. But they got more and more until in the end of the race directors had closed  9 of the 26 obstacles . Underwater Tunnels and Cage Crawl were regularly closed during night ops, Everest, the Gauntlet, Leap of Faith, T-Boned, Skidmarked, Lumberjacked and Ladder to Hell were closed because of ice. (I later got to see how Ladder to Hell looked like. It had at least an inch of frozen mud all over it, making it a real safety hazard.) So while I was trying not to freeze in my tent, everything and everybody else was freezing on course. At around 4 a.m. I checked on my friend Lukas, who was at that time in the top 5. He was also in his tent, shivering and trying to warm up. I gave him my remaining handwarmers, as I knew I would not need  them any more. 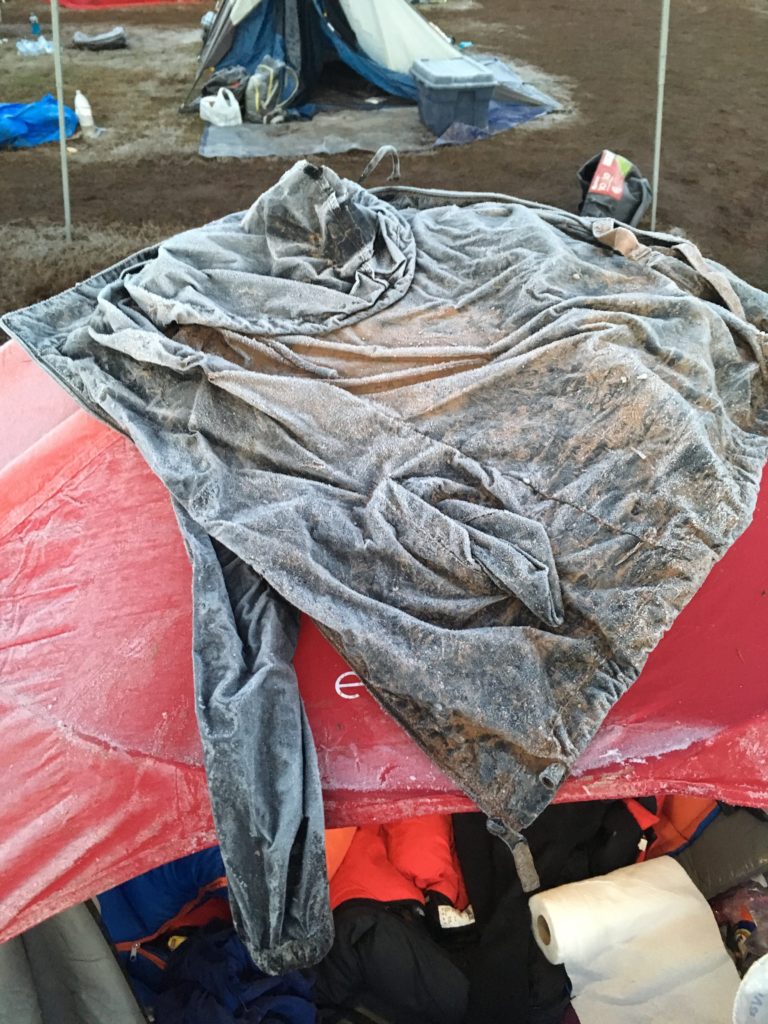 frozen windbreaker on top of my frozen tent

A bit before sunrise I got changed into my remaining dry wetsuit with the help from the Orphan Tent volunteers and got ready to go out on my final lap. I decided to join my friend Rhonda on a relaxed walking victory lap. We had met last year and this was her first World’s Toughest Mudder. And this was definitely the most fun I had the entire race. The sun was shining into my face, I was warm and not sore, and I shared a great conversation and some good laughs with a friend.
When we crossed the finish line we were both crying. I was in credibly proud of her and happy that I shared this moment with her!

So am I disappointed that I did not reach 50 miles like last year? Yes a little bit. But I am also happy I did not risk my health in these conditions. According to the statistics, only around 1200 participants of 1500 started, and only around 750 finished the race. This is a total dropout rate of nearly 50%. I saw people being severly hypothermic and injuring themselves while falling off obstacles. Is my ego worth the risk of serious injury? Probably not.
On the contrary I saw so many of my friends also perform really well in these conditions. Like Nick and Dalfim who hit 50 miles for the first time. Or my travel buddy Lukas, who reached 85 miles and an incredible 6th place finish. Or Anke, who completed her 100th Tough Mudder event and was crowned with a golden headband. I also saw so many kind gestures of teamwork and camaraderie,  complete strangers helping each other out on obstacles.
It is this spirit that makes this event so special and so dear to my heart.
MUDlanta: I will be back!
*quote by Anke 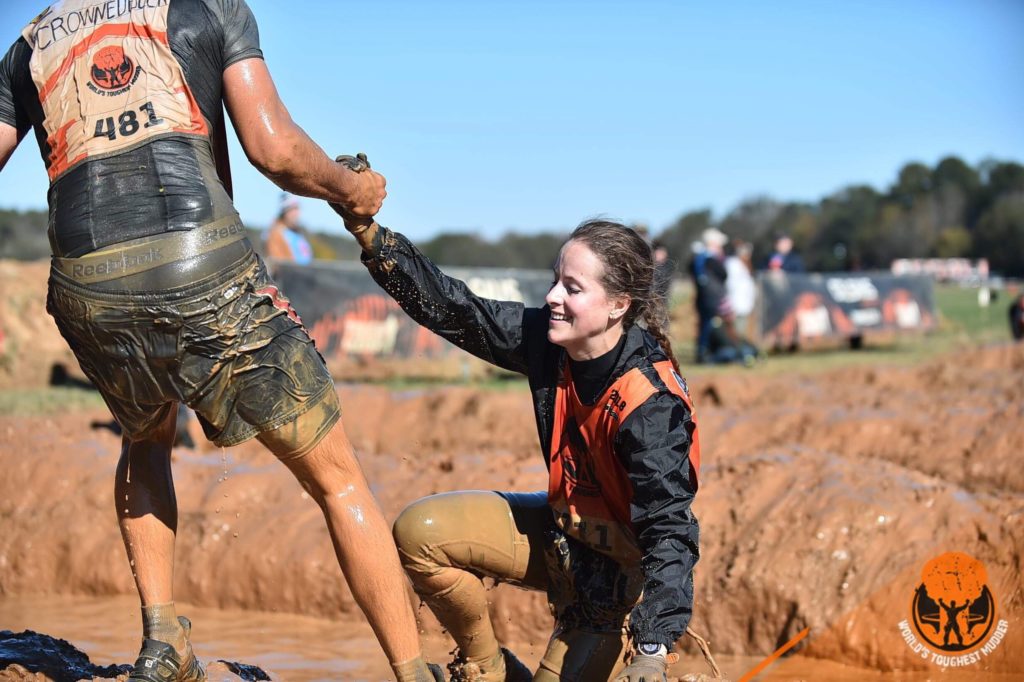