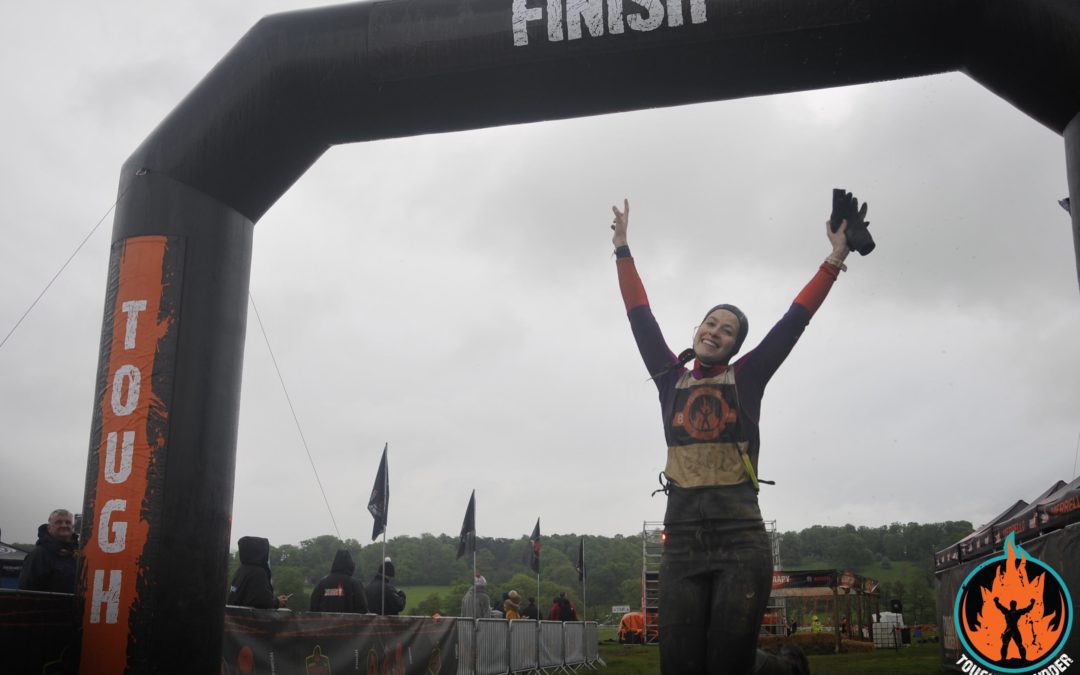 What is Europe’s Toughest Mudder? If you are into running and you have not lived behind the moon the past years I am sure you have heard about Obstacle Course Racing and mud runs. One of the biggest players in that market is Tough Mudder. It is not called a race – it’s called a challenge because the classic concept is a 10 mile mud run, which is not timed. In 2011 they started a different timed race format, the 24 hours World’s Toughest Mudder. It is a 5 mile course where people try to complete as many laps as possible.

So I was quite delighted to hear TMHQ (that is Tough Mudder Head Quarters) announce a new race format that bridges the gap between a normal Tough Mudder and the 24 hours WTM. The name of the new race is Toughest Mudder and it is an 8 hour overnight lapped 5 mile course and basically a shorter version of WTM. For 2017 five events were on schedule in the US and Canada, and one in the UK, also known as Europe’s Toughest Mudder.

So on the evening of May 13th 2017 I made my way up to Grantham an hour North of London. (Right before that I went to a fancy birthday party at Shoreditch House in London, bringing all my race gear and having lots of pizza. That might have contributed to my bad result) And I brought a lot of race gear for Europe’s Toughest Mudder. My kit included: full wetsuit, wetsuit leggings, shorts, vest, long-sleeved shirt, socks, gloves, and a hat. 2 pairs of trail running shoes, two headlamps, glow sticks, strobe lights, food, water, hot water, wet wipes and towels, and some clothes to change into afterwards, including my dry robe.

Unlike WTM where you have to bring your own tents we could drop our stuff in the big pit tent. I got a spot somewhere in the middle of the tent as I was on my own, got changed and set up and made myself I big cup of instant coffee. I saw some people from the WTM community and said hi. The distraction was very nice as I was quite nervous at the time.

We headed off to the start for a 30 min safety briefing. TMHQ announced that it would just be one 5 mile loop (unlike two loops like the previous races) and that the first hour would be mainly obstacle free (which means the BIG obstacles were closed, but the small ones were open) After the usual motivational warm up we made our pledge.

As a Tough Mudder, I pledge that: I understand this event is a race… but not an excuse to be a selfish jerk, I will uphold the Tough Mudder values of teamwork and camaraderie, I will help my fellow competitors complete the course; I will not whine… losers whine, I recognise that in life the race is long… and in the end, only really with myself.

And off we went at midnight into the darkness.

As the race started at midnight everyone was wearing their headlamps, strobes and glow sticks at the start. So when we headed off the light show was quite spectacular. Because I knew it would not last long, I still tried to enjoy the views.

I was wearing my neoprene shorts with winter running tights on top, my Orca neoprene long sleeve with my neoprene vest on top and my neoprene hat in a pocket. I was not sure how many water crossings there would be in the first lap, but the weather forecast predicted rain and wind so I tried to play it safe.
Turns out too safe. 2 miles in I was sweating like a pig. The course only included a few water crossings, but most of them were only hip high.
And I also realized soon enough that I had not applied enough anti chafing balm. And that a lot of coffee works like a strong diuretic.

I finished my first lap a bit before 1:15. Immediately I headed into the pit tent, grabbed my anti chafing balm and ran to the portapotties. Once I completed this emergency mission I went back to the pit tent to grab some food and water.

Someone had given me the tip before to keep my stops as short as possible and I soon realized why. I was getting cold soooo fast and after five minutes I was absolutely freezing. So I went out again.

On my second lap the obstacles started to open up and I pretty much had to do everything except King of the Swingers – Hangtime.
It started to rain and with all the water obstacles happening I failed nearly every obstacle that came along. Some of them I did not even try. The risk of of getting hurt was just too high. Those includes Everest/Grappler, Funky Monkey the Revolution and Kong. With every failed obstacle my laps got longer as I had to do the penalty loops too.

But there were some positive surprises. I absolutely loved Augustus Gloop because it is so much fun. Liberator was hard and slippery but I could do it without help. Arctic Enema was ice cold as always, but my neoprene hood helped a lot. I did Operation for the very first time and found it really easy with the right technique.

A lot of people were out there on the course but with poor equipment. A guy in shorts and a t-shirt helped me over Mud Mile. He was shivering so hard that I screamed at him he should just quit and go home to warm up.
In the end Lap 2 took me a little over 1:45 hours.

I tried to keep my next pit stop as short as possible. But I realized that I packed the wrong food. I brought lots of nice solid foods, which I could only eat with clean fingers and some time. Which both I did not have.

Same for water. I brought a big 2 litre water bottle that I had to open and close every time and that I could not take on the course with me.
I also had to take off my shoes and clean the inside from all the stones. With the neoprene socks I could not wear my favorite trail running shoes, and my plan B shoes were just not as good.

This one was definitely the hardest lap. They always say the night is the coldest and darkest right before dawn and this is definitely right.
Wind and rain became stronger and I was starting to get cold. I had not brought a wind breaker jacket, which would have helped me a lot.
I then had to do KOTS Hangtime for the first time. In theory it looks like a fun obstacle. You jump, grab a swinging bar, swing to the other side, grab a rope and climb down. If you fall down you land in muddy water.

I had only tried it once the year before and had failed miserably, landing back first on the water. My second attempt was not much better. I failed again, and even though I did not land on my back I inhaled a big bunch of dirty water.
After that I was coughing heavily and could barely breathe when I got out of the water. I could only walk the penalty loop and then run only slowly for the rest of the race. My lungs felt blocked for three days afterwards.

Slowly dawn came and I was hoping for some sun. But no, the weather stayed miserable. By the time I reached mud mile I saw people left and right skipping obstacles. I assume either because they gave up or because they ran out of time. It was around 5am when I realized that I would not make 5 laps and reach contender status with my current speed. And probably a few other people realized that too, but decided to rather cheat than not reaching contender status.
I finished lap 3 at 5:16 in the morning.

During my last pit stop I noticed that the tent was half empty. The guy that had the spot on my right, who looked super professional earlier on with his iron man t-shirt and girlfriend as pit crew had already left. But also everywhere else, right, left and center people were dropping out.

Giving up was never an option for me, so I headed out on lap 4.

It was already light and now I could see how empty the course really was. I was on my own most of the time. I still failed most of the big obstacles on purpose. No, I did not try KOTS again. Somewhere before Birth Canal Sara Knight (who is an Elite OCR Racer and placed second in the end) came up from behind and cheered me on. This gave me a quick boost, especially as there were not a lot of women left on the course.
I had to wait at Block Ness Monster a little bit as there were no people to help me get the thing moving. Yes, not only are you lonely and miserable, but also stuck at the obstacle if no one comes along.

My very last small victory was at Operation that final lap. When I approached it two guys passed me and headed straight into the penalty loop. After I successfully completed the obstacle they passed me again. It turned out that these two strong guys were too afraid to do the obstacle, because of their lack of fine motor skills and balance.

It was an AMAZING race. Unfortunately they only had one in Europe, but I would do it again immediately. (Maybe I’ll be flying out to Toughest Mudder Chicago if I find a sponsor).
It was definitely great training for WTM and I now know much better what to expect and how to gear up. I still need to prepare myself for actually camping in the pit. And that stupid 10m cliff jump that scares the hell out of me. But I feel much more comfortable that I can do 24 hours and 10 laps. I was not very fast that night, but I moved steadily and consistently. My last two laps both were about 2 hours per lap, and I still lots of energy left at the end.
But the most important part about Europe’s Toughest Mudder was the community spirit. It really surprised me how friendly and helpful everyone was on and off the course. How many people cheered me on or gave me a hug.

The OCR community is generally great, but the Tough Mudder Community is still different in a positive way.
I am now really looking forward to WTM. I will be on my own, but I know that my new friends, the Orphan Tent and the Community will make up for that.
Update: Did I reach my goal of 50 miles at World’s Toughest Mudder? You can find out here.