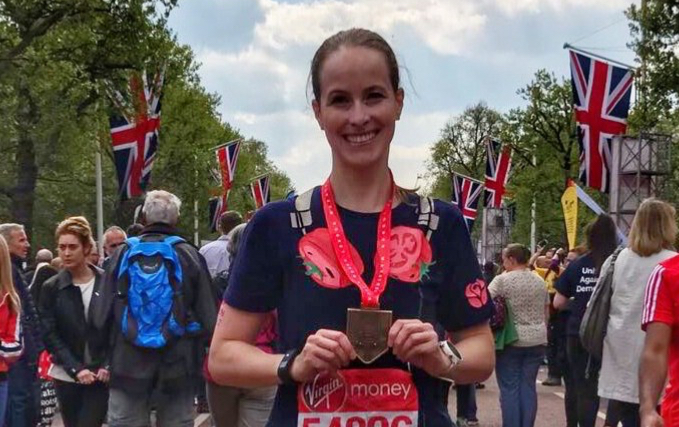 In April 2017 I ran the London Marathon as my first of 6 World Major Marathons. I completed it just one week after the famous Two Oceans Ultramarathon in Cape Town. The London Marathon is a fantastic race, with thousands of charity runners and even more people celebrating in their favorite pub on the side lines..

Traveling to London is probably the easiest part. There are several major airports as well as train and bus connections to Europe. Located was the Expo at exCel convention centre in east London. It was fairly complicated to get there, as it could only be reached by DLR and the original station was closed. The London Marathon starts in Greenwich, which is also in East London. Depending on your Start Zone you were assigned a train station to get to and from there trains would take you to the start. We took the DLR to Greenwich station from Bank. As a runner you can travel for free, just show your bib number to the station staff and they will let you in. The finish line is at the Mall in front of Buckingham Palace. From there you have various tube stations in walking distance from where you can escape the crowds. And trust me, you want to escape the crowds asap.

The Expo is really huge, as you would expect it to be. If you want to have your name printed onto your t-shirt you can do it here but be prepared to wait around an hour. But there are enough stalls to check out in that time.

I especially liked the medal producer stall. So many amazing medals to look at. And think of the “what if I would ever design one?”
The start line area is big and well equipped with water and porta potties. I did not have to wait a single second to drop off my stuff, and only a little bit at the porta potties. It actually took nearly 30 minutes until everyone crossed the start line, so there is no need to rush and you can squeez in from the side.

The London Marathon starts on Greenwich Hill in East London. There are three separate start areas and whose courses will merge after around 5km.

The first 5km are fairly downhill until the course reaches the famous Cutty Sark ship on the Thames. The course then heads West through residential areas until it reaches Tower Bridge at 20km. Running over Tower Bridge was probably the most spectacular and exciting part of the race. It felt like flying. A bit similar to running through Times Square in the NYC Half or Chapman’s Peak in the Two Oceans Marathon.

After Tower Bridge and the Tower of London the course heads back East towards Canary Wharf and for a short period of time it runs parallel in two directions. This was very motivating for me as I spotted one of my fast friends.
After a few turns in Canary Wharf, that annoying 180 degree turn and the steep incline onto a bridge the course then headed back West. After the parallel section and the Tower of London it continues straight along the Embankment. Unfortunately at around Monument it passes through a tunnel and I was never really able to catch a glimpse of St. Paul’s.

But running along the Embankment also means that the streets are actually crowded with spectators (even more than normally) and that the end is near.
A turn at Big Ben (1 mile to go), a short run along St James’ s Park (800m to go) and a final turn in front of Buckingham Palace (100m to go) and the Marathon is over.

Overall the course is well equipped with everything: water, lucozade, vaseline stations, portapotties etc. But most and foremost it is equipped with the biggest crowd of cheerful spectators. People are literally picknicking or having Marathon parties on the side. I have never ever seen so many in my whole life. There were only 2-3 spots where there none.
I even missed my personal cheerleaders because I was distracted by so many others.

As soon as you crossed the finish line you were handed your medals. If you were luck, the royal family handed it to you, like it happened to my friend Mike.
If you were then looking for water you would be surprised. There are no water stations. This us because there are pre-packed bags containing food, water, a sports drink and your London Marathon finisher t-shirt. But if you are completely disillusioned and crushed, you would probably miss it.
There are also a lot of photo walls where you can have your picture taken.

After that there are the bag trucks. Based on your bib and start area color you will be assigned a side. Red was left, blue was right. There are around 10 lorries in a row, you just have to pick yours. I walked straight past mine (because I was absolutely knackered), but a friendly bag drop lady saw me coming, shouted at me and just handed me my bag. This is what I call great service: I was given my two bags, I did not even have to ask for it.

After the immediate finish area there is a meeting point zone at the Mall and the Horse Guard Grounds. It is absolutely packed with people.
I met up with my personal cheerleader at the letter “A” because my charity’s name started with A. Big mistake as A is the first letter and it felt like everyone was waiting there. If you want to be smart, pick Q (like 007 Q), or XYZ (if you can walk that far).

From there you can easily catch the tube at Green Park or Trafalgar Square stations.
The most important thing after the Marathon is to keep your medal around your neck. A lot of pubs and restaurants will offer free food and drinks to finishers. I managed to get a free burger and a full bottle of champagne. If you are still able to walk you can do a free pub crawl that afternoon. Or you give your medal to your best friend and just crawl into bed.

If I had to write something about sightseeing in London I would have to start a new blog. So I’ll keep it simple. London is a fabulous city to visit, no matter if it is your first time or your tenth time. There is always something new to explore, no matter if it is culture, art, music or food.
But the London Marathon weekend is even more special. This city really embraces this race, and everybody is celebrating. Apparently there are around 1 million spectators on the course for 40,000 runners. (That means 25 spectators per runner. )
The ambiance is amazing and truly unique, as is the experience.
This is why I would recommend the London Marathon for everyone, at least for a once in a lifetime experience.