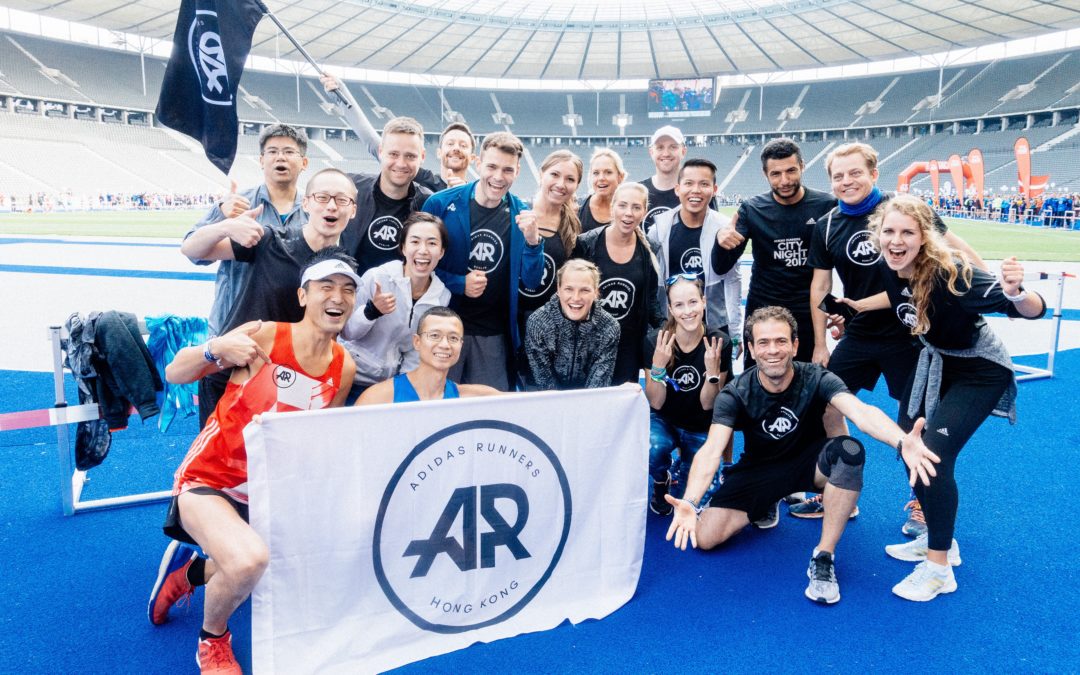 When you are a runner, you have heard about the Berlin Marathon. It is the flattest and fastest course in the world and origin of many World Records. The current one being 2:02:57 from Dennis Kimetto in 2014. Even if you are a non-elite athlete running Berlin Marathon is special. It is an honor, as you either have to be very fast or very lucky to get it. It is also a challenge, as nearly everyone running will try to take advantage of the flat course and run a new personal best. And it is historic because the course goes through a city that used to be divided for a long time. So when I won a spot in the ballot I was very happy. Even more when I found out that quite a lot of my friends would also be running.

After London Marathon in April 2017, where I missed my goal time of 4:15:00 by just 55 seconds I wanted to train really hard and beat the 4 hours. I was very ambitious with my training plan. I wanted to run lots of intervals and regular long runs. And of course stick to strength training and stretching program. But things did not go as planned. In June I moved back to Germany and started a new job, which was more stressful than anticipated. I decided to take on trail running, I climbed a few mountains and ran the occasional obstacle race. And suddenly it was end of August and I had a single long run in the books.

In addition I had injured my hip and had to stop running for two weeks. Three weeks before Berlin Marathon I finally did one long run of 33 km. A week prior I ran the Tegernsee Half Marathon with my friends from AR Munich. A lot of the people that were also signed up for Berlin Marathon were only doing a 10 km or a slow 21 km. However I was able to beat my PB by nearly 3 minutes which gave me hopes to beat the sub 4 in Berlin. You can find the race review of Tegernsee Half Marathon here

When I arrived in Berlin our schedule was already quite full. We first picked up our Adidas Runners Shirt in the Adidas Shop on Friday. That night I joined Runtastic at a pre-race cocktail with the Berlin Marathon Organizer SCC-Events. Saturday morning I ran the breakfast run with my Adidas Runners friends. It was really nice seeing everyone from all over the world.

After the breakfast run I met up with some more friends to go to the Expo, funny pictures and shopping included.
When I left the Expo I bumped into Katherine Switzer who was in Berlin for her 261 Fearless project. I had the chance to talk to her for a few minutes and it was incredibly inspiring. 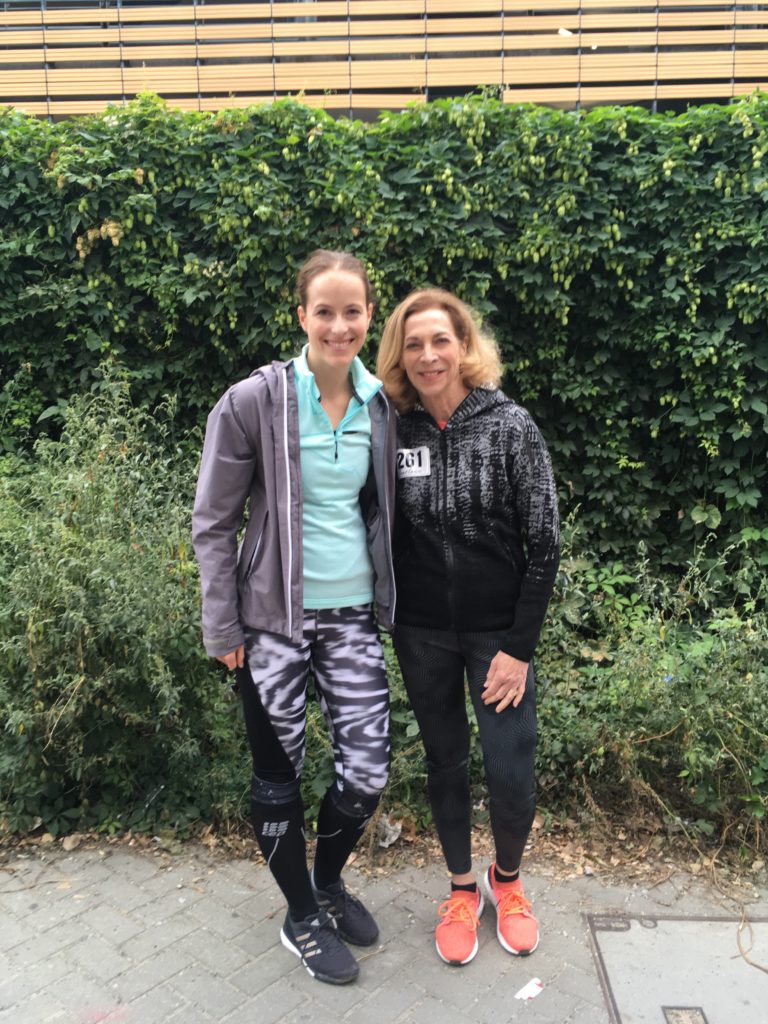 After that we headed to the Adidas Runbase for some all you can eat pasta and I even did a 30 minute core workout.

Murphy’s law: when everything goes wrong

At that point I was feeling incredibly tired and like I was getting a cold. I headed straight to bed. The night before the marathon was rough – as always. I couldn’t sleep and was awake at 4 a.m. How should I run Berlin Marathon on just 5 hours of sleep?
The weather that day also didn’t brighten up my mood. It was foggy and raining.
The Adidas Runners had set up a Berlin Marathon Race Base in the Haus der Kulturen close to the start. Around 400 runners from all over the world were there to run in their new AR t-shirts. The spirit was great and the live DJ definitely lifted everyone up.

Before the race everyone was getting ready and step by step the people headed off to their start corrals. I tried to stick to Annika, our 4:00:00 pacer. It had stopped raining and there were puddles everywhere. My shoes and feet were wet before I had even started.
I was freezing even though I was wearing an extra layer. And I had to pee but the porta potties were all really busy.
Once we headed off I hoped that my spirits would rise, and that I would enjoy the race. But I did not. Everything was grey and foggy, and I was just tired. And I really had to pee.

It got worse every kilometer and by the time I reached 10km I was just looking out for a bush where I could escape to. Luckily at km 12 there were some porta potties. After I was done I looked at my watch: I had lost nearly 3 minutes and of course I had lost my 4:00:00 pace group.
And that’s when I made a very stupid decision: I decided to go fast and catch up with them. Stupid, because 3km later I had heavy side stitches and could not run anymore. So I walked a bit and gave up on meeting them again and also on my 4:00:00 goal.

And so I decided to just continue running with a good pace and enjoy the race. I was looking forward to the unofficial cheering zone at km 21. However, there was no cheering zone, but there was one girl from the AR Speed Squad, Mireia, that had abandoned the race at km 21. She cheered me on and that gave me a big boost.

And suddenly I saw Annika and her 4:00:00 shirt again. I could not believe I had caught up on them. Maybe the sub 4 goal was not out of reach?
The next 15km were not fun. I suffered from every type of pain you could imagine. The lower back pain was probably the worst.
At km 27 I saw my friend Romy who had run in our group until then falling back more and more. For a moment I thought of joining her because I had no energy left. But I knew I had to fight. So many people believed in me and I just had to believe in myself.
Finally the big open air cheering zone of AR Berlin arrived at km 37. Shortly before we ran over a timing mat, and suddenly the big screen lit up: 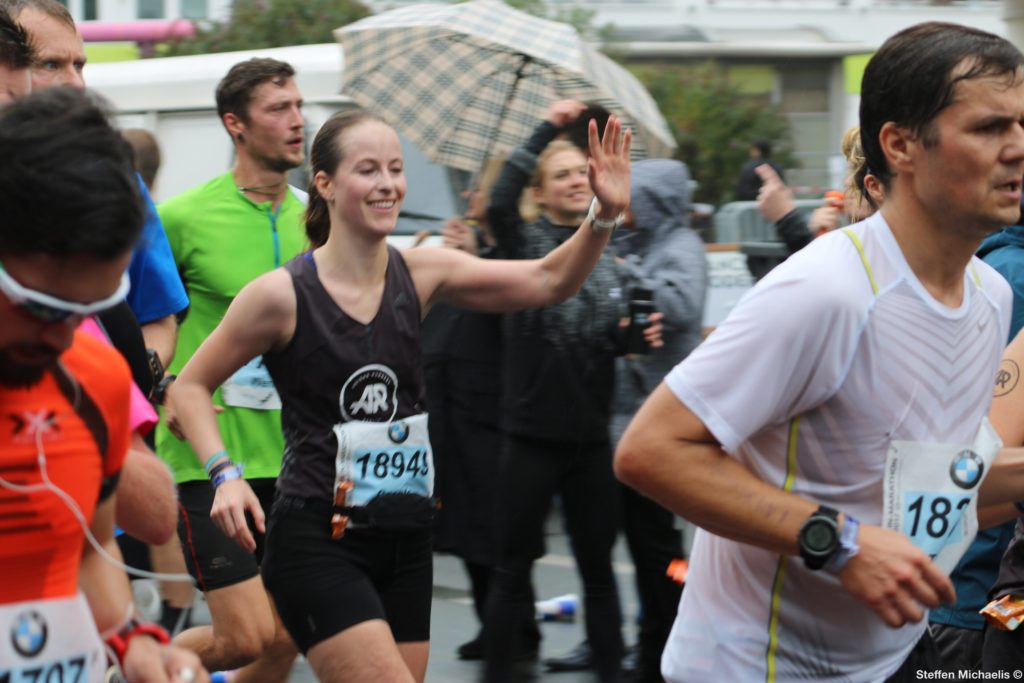 They knew that the sub 4 group was coming and they made sure they gave us the energy boost we needed. Drums, music, cheers, and big smiles! My heart was jumping of joy for a second.
Shortly after that I passed Robin Arzon, a NYC celebrity, ultra runner, coach and book author. I had known she was in town because I had followed her on social media after I took one of her virtual Peloton cycling classes earlier this year. I made sure I said hi and wish her all the best.
And deep down I thought: Gosh, I have really good race karma this weekend. I really can do the sub 4!

All you need is good Race Karma

And then I fought for the last 5 km. It was really hard, I had no energy left and was getting dizzy. But Annika kept going and so did all the others that were still in our group. I was looking at my watch every 10 seconds. My GPS watch showed an additional 500 metres, and I could not calculate my real pace in my head or how fast I had to go to make it in time.
So when I first saw the Brandenburg gate I was relieved. I took out my phone for the obligatory marathon tourist selfie. 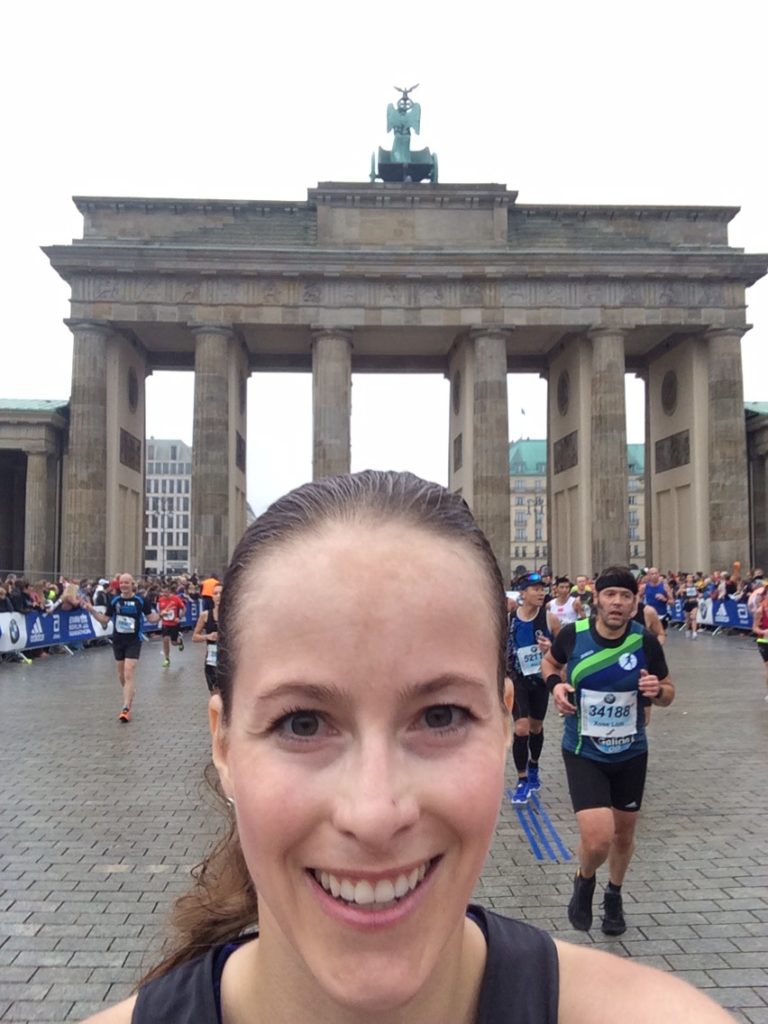 And then I looked at my watch and panicked…

We were stronger together

… I had two minutes left to break sub4, but the Brandenburg Gate was not the finish line. I still had to run a bit. But I did not know how far. I could see the finish, but I had no clue how far away it was. So I started running as fast as I could.
And I made it. After 3:59:28 I crossed the finish line. I had nothing left to give at that point and could not breathe anymore.
To my right I saw Fiona who also finished with us in sub4. We hugged each other and she started crying and I had to shed a few tears as well.
We were able to gather a few of our sub 4 group, hugging each other and handing out high fives. This was us. We started together, we ran together, we finished together.

And we thanked Annika for being such an awesome and consistent pacer.
Also right after the finish line I bumped into my friend Ron. He was the official announcer of the Berlin Marathon, congratulating nearly everyone that had made it, also me.
I had met him earlier this year at London Marathon, when I spontaneously hosted him and two other guys, without knowing them, when they were left without a place to stay.
My race karma from London was still going strong in Berlin, making me a happy sub 4 finisher.
I was even happier achieving this with my friends from the Adidas Runners Community. Thank you all for organizing this weekend, for running and partying together! It would not have been the same without you.

It’s now been a week since the Marathon and my body has slowly recovered. But my season is not over yet. My London race karma had gotten me a spot for NYC Marathon, where I will be pacing my Dad to his first Marathon. And after that I will be doing a crazy 24h obstacle race called World’s Toughest Mudder. (You can read here what I experienced there)
And once I survive that…
… we’ll see what karma has planned for me!