Chicago Marathon – a run through the Windy City 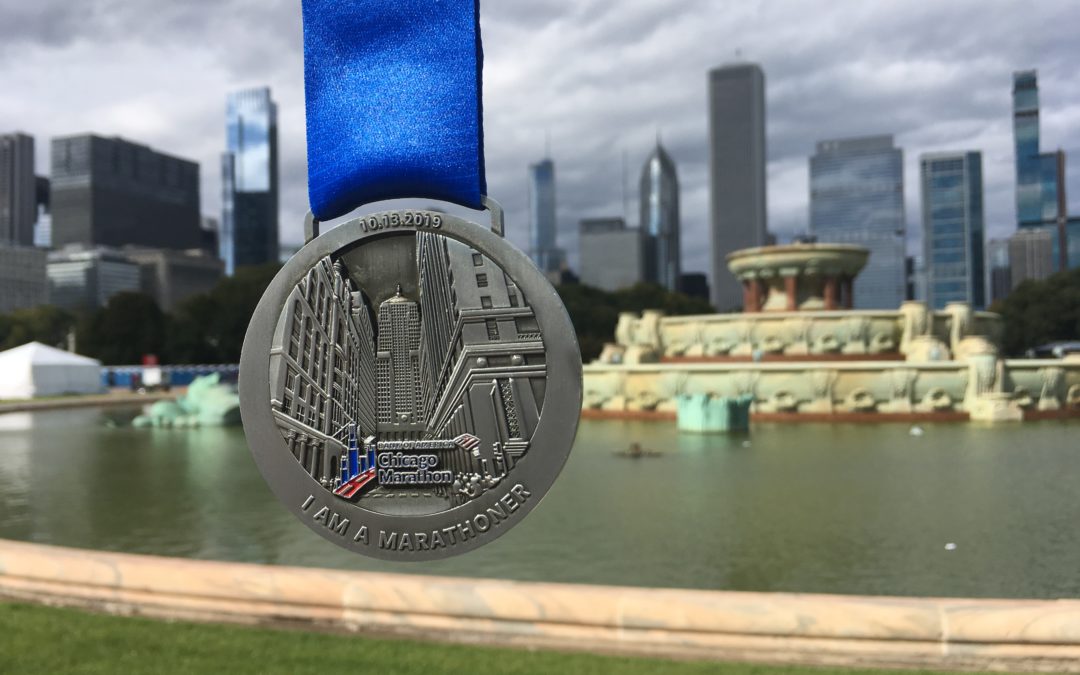 The Bank of America Chicago Marathon is one of the biggest Marathons in the world and also on of the 6 Abbott World Marathon Majors. It was number 4 on my list after London Marathon, Berlin Marathon and NYC Marathon. Chicago Marathon always takes place in October on the Sunday before Columbus Day (which is a public holiday in the USA).

I ran the Chicago Marathon just 4 months after the birth of my first son. Which was a pretty big challenge. The training with the weakened pelvic floor was not easy. And it was not easy to get all baby logistics right. Luckily, my fiancé came to Chicago with me, and watched our son during the race. He even met me halfway, and I was able to breastfeed the baby in a first aid tent along the way.

My finishing time was not great because of the breastfeeding break and the persistent abdominal cramps, but I still managed to finish what I’m incredibly proud of. And even more I was pleased that Paula Radcliffe handed me my medal at the finish. She was always a great source of inspiration for me during pregnancy and training.

Chicago is the third biggest city of the United States. Chicago O’Hare Airport is one of the biggest airports in the US as well, therefore getting to Chicago should be fairly easy. The city also has a great public transport system, with the famous overground trains running through the city center. The start and finish line of the race are located in Grant Park and are easily accessible via public transport. Also the expo is very well located at the McCormick Place Convention Center. There are several free shuttles going there from various parts of the city.

Accessibility to the race

As Chicago Marathon is one of the Marathon Majors you can’t just sign up for that race. The most common way to get a spot is either the lottery or ballot or to run a fast qualifying time. The qualifying standards are less strict than for other Marathons like the Boston Marathon. And the chances of getting a spot in the lottery are also not too bad either. Other ways to run the Marathon are of course via travel agents and tour operators and charities.

The Chicago Marathon Expo is located in the McCormick Place Convention Center just south of Grant Park. It is easily accessible by public transport, and there are also various free shuttle services to the expo, running every 15 to 30 minutes approximately. The expo is well organized. I had to queue a little bit to scan my registration, but afterwards picking up my bib was super fast and easy. The expo is fairly big with lots of stalls, vendors and stages. Unfortunately it was also very loud because every stage was trying to be the one with the loudest music. (Which was very unfortunate as we were there with our 4 month old jet-lagged son who was desperately trying to sleep)

The Chicago Marathon race village is located in Grant Park. It consists of three different start waves: red, orange and blue, which are further divided into several corrals. Your bib will include your wave color and your corral, and you should enter the race village through your designated gate. In the village you will find of course your the bag drop and the porta-potties, but also a lot of other amenities like water, Gatorade, gels, and emergency supplies. When you return to the race village after the race you will also find a family meet-up zone there, with large columns with the letters A to Z. 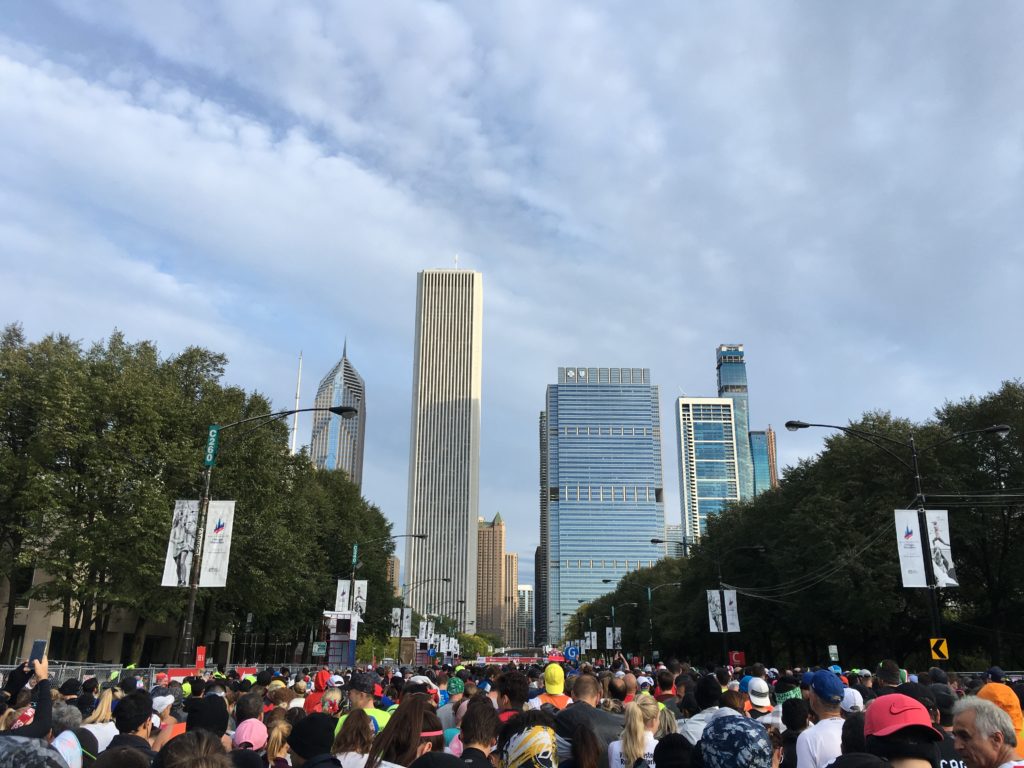 The Chicago Marathon course starts in a northern direction. It then turns left to cross below Michigan Avenue, also known as the Magnificent Mile, and then turns south towards the famous Chicago Theater. It then heads North with the most northerly point being just after Lincoln Park. The course then goes back south with the Half Marathon mark being right in the City Center. Next is a stretch that heads west along the famous Route 66. After returning towards the city and the Loop it then goes South and through Chinatown. The last miles head straight back North towards Grant Park and the race village.

There are water and aid stations nearly every mile. All of them have water and gatorade, and towards the end there are also gels and bananas. There are first aid tents every 5 km, and there you can also find vaseline, tape and porta-potties. I was even able to meet my fiancé at one of the first aid tents and nurse our 4 month old son there. 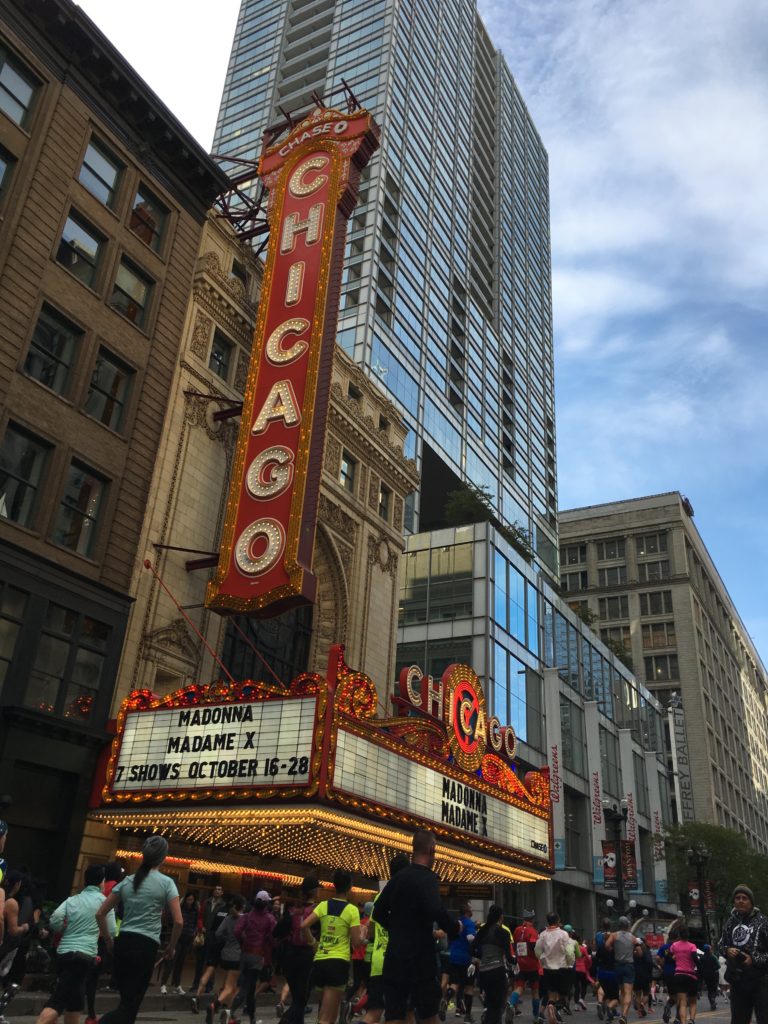 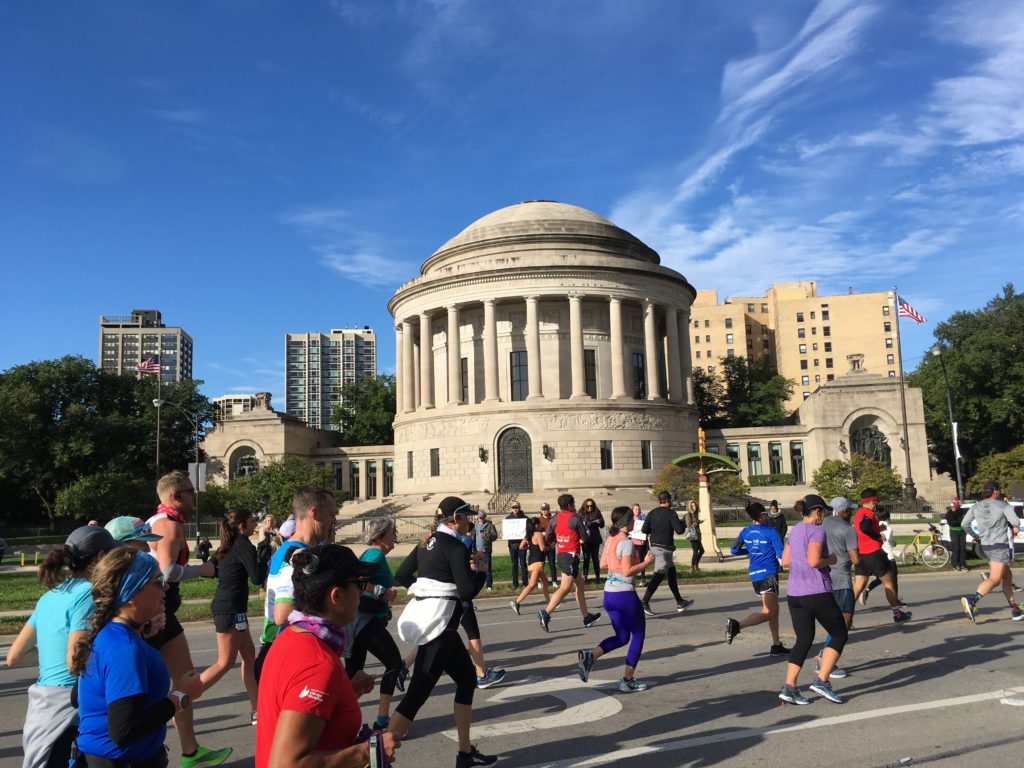 Chicago also has a lot to offer even when you are not into running: