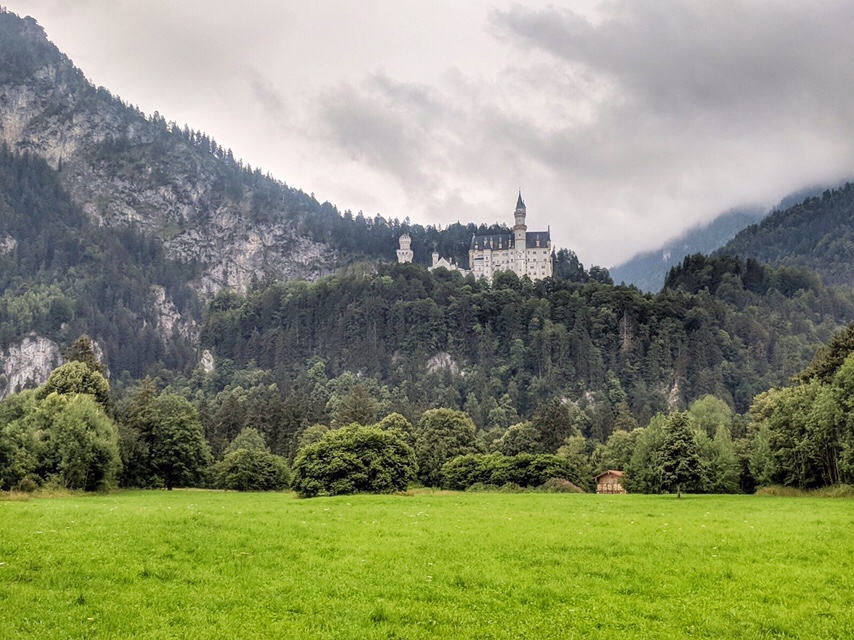 You might have never heard of the German town Füssen. But you’ve probably heard of Neuschwanstein castle, the famous castle of King Ludwig of Bavaria, which is located nearby. The Königsschlösser Romantik Marathon is a small local race that covers exactly this area and runs past the pretty castles and lakes of the Füssen area. They offer a Half Marathon and 10km race on Saturday, as well as a Marathon on Sunday. I ran it as marathon no. 8 of my 12 Marathons in 12 months project, and really enjoyed the castle view (after Disney castle, Prague castle and Liechtenstein Vaduz castle).

Füssen is a small town located in the south of Bavaria, right at the border of the Alps. The easiest way to get there is by car or train. The nearest airports are Munich  or Innsbruck. The city itself is pretty small, so everything is walking distance.

Bib Pick Up and pre race

The bib pick up is lcoated in the Marathon tent, which is set up on a big parking lot in the middle of the city. There are only around 600 runners running the Marathon, and you can basically register until the start at 7:30. In the tent you can also get food and drinks and buy some runninig gear. But don’t expect much, as the event is really small. the start and finishl ine is located right across the parking lot. In the parking lot you can also find 6 (!) portapotties, which does not sound much, but is enough for all the runners.

The first half of the course heads west towards and around lake Hopfensee before returning back to Füssen. Afterwards it heads east along lake Forggensee. At approximately kilometer 30 you start to run at the bottom of Neuschwanstein castle and Hohenschwangau castle. The view and scenery is absolutely fantastic. After running around the small lake Schwansee the course heads back into Füssen. One final climb and you are decending toward the finish line, where they spectators cheer you on and hout your name.

Most of the course is on tar and concrete roads, but also gravel paths and trails. The refreshment stations are well equipped with water, sports drinks, coke, food and sponges. The volunteers are absolutely lovely, shout out your name and cheer you on. Unfortunately there are no porta potties on the course, but there are enough bushes in case you really need to go.

The finish line area is really small, and spectators can greet you right at the finish line. You are then handed your medal and a space blanket to keep warm. There is also plenty to eat and drink. After the race you can head back to the main Marathon tent and watch the awards ceremony and raffle. Another big bonus are the showers in the ice statium, which is just a short walk away. The showers are not great, but they do their job.

Of course the main attraction is the famous Neuschwanstein Castle. But don’t miss out on the smaller castle Hohenschwangau, or the castle and monastery in Füssen itself. You can also take a gondola ride up the Tegelberg. After the Königsschlösser Romantik Marathon you can relax in the local thremal spa “Kristalltherme Schwangau”.

This website uses cookies to improve your experience while you navigate through the website. Out of these, the cookies that are categorized as necessary are stored on your browser as they are essential for the working of basic functionalities of the website. We also use third-party cookies that help us analyze and understand how you use this website. These cookies will be stored in your browser only with your consent. You also have the option to opt-out of these cookies. But opting out of some of these cookies may affect your browsing experience.
Necessary Always Enabled

Any cookies that may not be particularly necessary for the website to function and is used specifically to collect user personal data via analytics, ads, other embedded contents are termed as non-necessary cookies. It is mandatory to procure user consent prior to running these cookies on your website.